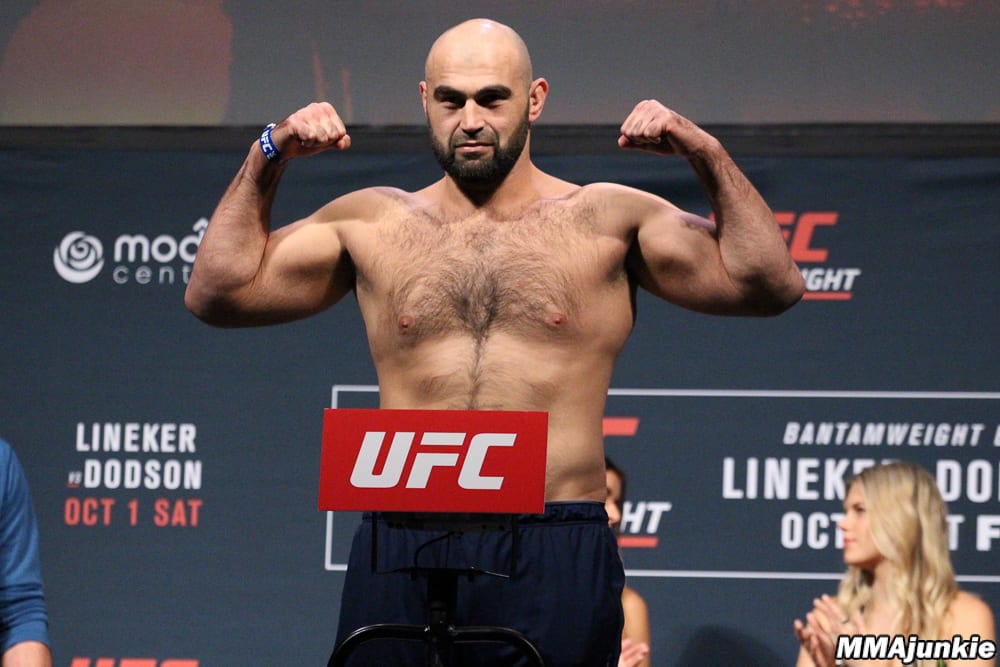 No fighter exhibits the ebbs and flows of combat sport more so than Arlovski. The former UFC heavyweight champ has had moments in the octagon where he looked like a world beater, and he has had moments when the world beat him. Regardless, “The Pitbull” had his hands full with the Russian Abdurakhimov.

Abdurakhimov made the walk to the octagon for the sixth time against Arlovski in Moscow. He has compiled a record of 3-2 in the UFC. If “Abrek” is to achieve his dream of becoming world champion he must first get past the ageless Arlovski.

The big men waste no time getting at it. Arlovski landing a couple nice knees in the clinch early on. Abdurakhimov clip Arlovski and follows him to the canvas. The fight stalls as Arlovski closes guard. After two minutes of inactivity, the referee stands the fighters back up with 90 seconds left in the round. Arlovski catches Abdurakhimov with a low leg kick and trips the Russian. The round ends with Arlovski stumbling off balance. Abdurakhimov may have won the round.

Abdurakhimov comes out with a spinning elbow that nearly missed Arlovski’s head. Arlovski lands a combo and Abdurakhimov lands one of his own. Both fighters still seem like they are trying to figure each other out in the final frame. Arlovski takes an incident eye poke. The fighters touch gloves and find themselves in the clinch again. With 90 seconds left in the fight, it would seem either guy can still win. Abdurakhimov knees Arlovski in the man parts – the fight pauses momentarily. The last minute of the round was very underwhelming as Arlovski looks to be frustrated. Abdurakhimov should win the fight.