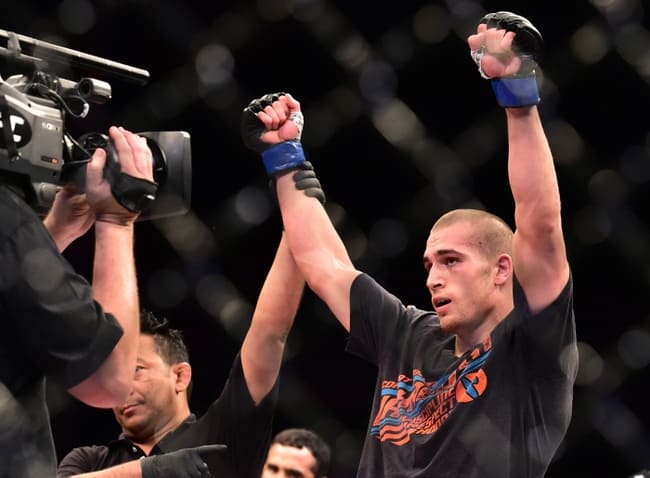 UFC Fight Night 76 is underway in Dublin, Ireland, tonight (Saturday October 24, 2015), as the event hobbles on without the original main and co-main event fights. Subject to plenty of bad luck and injury woe, the UFC Dublin preliminary card fights were still part of a great atmosphere in the 3Arena. Here’s how the fights transpired:

First up was Bubba Bush vs. Gareth McLellan at middleweight, and it was a back-and-forth fight to open the evening’s festivities. McLellan came close to securing a choke in round one, and really dominated the second round with his ground and pound. Another lopsided round in the third, and McLellan with the TKO by strikes on the ground with 2 seconds left.

Featherweight Darren Elkins and Robert Whiteford collided, and it was a grinding show from Elkins for the most part. The dominant wrestler answered back following a close first round, slowing down the action in the second, and then looking to work the ground game in the final frame too. ‘The Damage’ managed to wobble Whiteford late on, winding out the round on the back of his Scottish opponent. UD for Elkins.

Tom Breese faced the hometown favorite Cathal Pendred in a welterweight showdown, and it was all Breese. The Tristar prospect landed with huge body kicks and straight left hands, breaking the Irishman’s nose and finishing with a flurry of punches in the opening round. Great TKO for the young man from Birmingham, England, Tom Breese.

Scott Askham faced Krzysztof Jotko at middleweight and it was the Polish native that drew first blood with some nasty elbows. The Englishman remained composed although bleeding above the eye, locking up a tight armbar. Jotko works well although his arm is bending graphically. Great opener. Much more cagey in round two, until an eye poke wakes Askham up and he lands a great front kick.

Both men feeling the pace in round three, and there’s a lot of clinching against the fence. Askham is a bloody mess by the final seconds. Jotko by SD. Ericka Almeida and local Aisling Daly went at it in the women’s strawweight division, and this was a war typical of ‘Ais The Bash.’ They clinch heavily for a large part of the round, with Daly scoring a great trip toward the end of the round. Great ground and pound to end the opening stanza.

The second frame starts and they trade again, but Daly is making this a clinch war. The Irish native gets another outside leg trip and they go to ground. Nice reversal by Almeida, she takes the back of Daly now, much better round for the Brazilian. The third starts and they trade wildly, in to a strange suspended position against the cage now. Daly getting more shots in here. Cranking the toes now is Daly, as she lays down strikes for the last minute. Decision win for Aisling.

Mikael Lebout had unfinished business with Stevie Ray at lightweight to round off the card, and the Scotsman Ray lands some nice punches early on. A beautiful counter left by Ray rocks Lebout, he remains patient though. A nice response by the Frenchman with a long combo, bu Ray fires back with kicks and 1-2 combos. Ray starts to find a home for that combo over and over, he wins round one.

Ray is moving well in round two, nice slick punches, Lebout looking a bit flat here. Left high kick for Ray, but Lebout rushes him against the cage. ‘Braveheart’ now with a few right hooks, the Frenchman eats them though. Lebout pressuring Ray now, much better work from him, but a nice TKD kick by the Scottish striker. Last round, right hook drops Lebout, and high kicks from Ray looking well rounded here.

Now they brawl against the fence, great elbow from Ray. Lebout with a good counter right, Ray shakes it off, and a left hook from the Frenchman. Straight left by Ray but Lebout is pressuring him still. Close round, but I’d give Ray the nod overall. Ray tosses Lebout in the air to end the fight. Ray by decision.