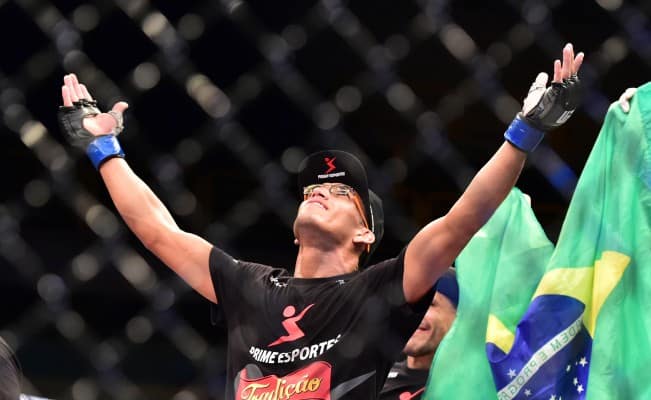 Showing that he could perhaps be ready to rise up the talented featherweight ranks, promising submission artist Charles Oliveira put on a convincing show in the co-main event of last night’s (Sat., May 30, 2015) UFC Fight Night 67 from the Goiania Arena in Goiania, Brazil.

After a grinding display of wrestling and boxing from American Top Team (ATT) product Lentz, Oliveira rode his vicious Muay Thai knees to a choke submission to stop the hard-nosed Lentz. For his definitive third round stoppage from a super tight guillotine choke, Oliveira earned the first of the card’s ,000 ‘Performance of the Night’ bonus.

The second “Performance of the Night” bonus went to TUF Brazil vet Rony Jason for his impressive triangle choke submission over Damon Jackson in the featured bout of the preliminary card.

“Fight of the Night” not surprisingly went to the featherweight grudge match between Oliveira and Lentz, where ‘Do Bronx’ finally put their rivalry, which was four years in the making dating back to a no contest due to an illegal knee at UFC on Versus 4 in 2011, to rest, earning a rare double bonus in the process.