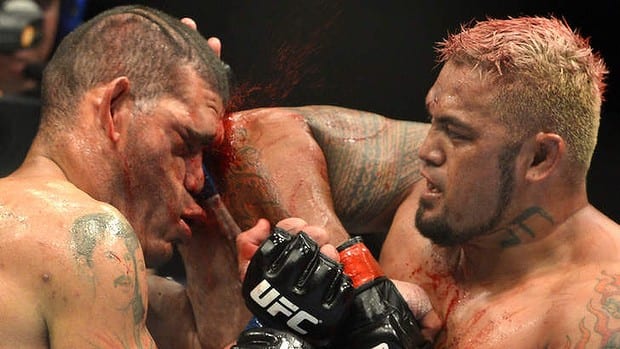 The UFC heavyweight division is currently enjoying a sort of mini-resurgence, and this bout has the potential to be the most exciting of all the fights we’ve seen recently. Obviously both fighters love to throw bombs; with Hunt favoring his left hook while Nelson prefers the overhand right. I think both will throw caution to the wind in Japan, absorbing numerous shots to land a few big ones of their own.

The only problem I see is Hunt’s massive weight cut; he lost nearly 19.5 pounds in the last day or so. He’s also been out of the cage since last December, and clearly hasn’t been taking his training with the utmost seriousness. That’s why I’m picking Nelson via third round knockout.

Both these heavy-handed tanks are known for their abilities to dole out punishment and for their freakish ability to absorb it. Nelson vs. Hunt really is a toss up, and comes down to who is craftier with their gameplan. For me, “The Super Samoan” has the smoother boxing, and will be finding a home for his hefty punches. Look for Hunt to put Nelson’s lights out in round three.

This weekend’s UFN 52 headliner between Mark Hunt and Roy Nelson has fireworks written all over it, with both men having ferocious power and granite chins. However, I personally think this is “The Super Samoan’s” fight to lose. Hunt has a clear-cut advantage on the feet and should be able to pick apart “Big Country” if he fights smart.

He has also been showing great takedown defense also in his last few appearances, so I personally can’t see The Ultimate Fighter (TUF) 10 winner getting the fight down. Nelson does have the ability to put Hunt down if he connects with one of his haymakers but I can’t see it. Hunt via KO in round two.

UFC Fight Night will most likely be headlined by a true heavyweight brawl. Nelson possesses a devastating overhand right and can put a man to sleep at any time; however, Hunt undoubtedly possesses the advantage on the feet. “Super Samoan” is a former K-1 grand prix champion and is one of the best kickboxers in the division. He will definitely be looking to keep this fight on the feet.

Nelson, despite his brutal power, has a solid ground game. He is a black belt in Brazilian Jiu-jitsu and owns five submission wins, so getting the fight to the ground will most likely be Nelson’s best chance to win. However, I don’t think he will be successful in doing this. Hunt boasts a very solid 70.91% takedown defense. Another key point to this scrap is cardio. Neither man is necessarily known for their cardio, but Hunt proved he could go five hard rounds in his last fight against “Bigfoot” Silva. Nelson has never lasted five full rounds. I think this will be a very exciting heavyweight tilt, but my prediction is Hunt by third round knockout.