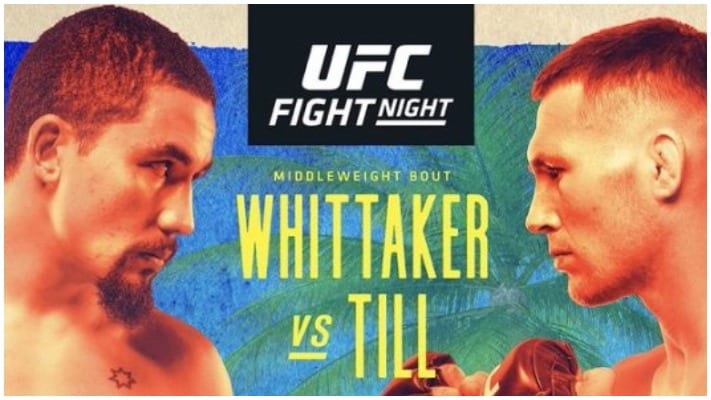 The final UFC Fight Island card takes place this Saturday (July 25) at the Flash Forum on Yas Island, Abu Dhabi. In the main event, former middleweight champion Robert Whittaker takes on Englishman, Darren Till with the winner moving one step closer to a shot at 185lb king Israel Adesanya. If you want to be a winner this weekend read on for our UFC Fight Island 3 betting preview were we look over the odds an offer our picks for each of the seven main card fights. Alternatively, check out bestlivecasino.vip for all the best casino games and your chance to win big before the fights.

Robert Whittaker vs. Darren Till

In the main event we have a true 50/50 fight. So much so that the oddsmakers cannot split them and are currently offering both Robert Whittaker and Darren Till at 9/10 to get the win on Yas Island. For this fight we give the edge to Till and expect him to find the finish on Saturday night – you can back him at odds of 23/10 to KO/TKO the former champ. ‘The Gorilla’ is the fresher guy who seems to be rejuvenated by his move up to middleweight. Whittaker on the other hand is coming off a long lay off and a brutal knockout defeat. He has come through several wars in the cage and a long list of injuries outside of it. On Saturday night we think you will see a declining Whittaker get taken out by the next middleweight contender.

Before that, Mauricio ‘Shogun’ Rua will face off against one half of the famous Nogueira brothers. Antonio Rogerio Nogueira has declared this fight will be the last of his career. Unfortunately for him we think he’s most likely going to out on a loss. ‘Shogun’ although somewhat faded is still very much able to hang with the best. His lone loss since 2015 came against top light-heavyweight contender, Anthony Smith. At odds of 1/2 ‘Shogun’ is a pretty safe bet, having already beaten his opponent twice previously he’s certainly one you should be adding to your bet this weekend.

Alexander Gustafsson is a big favourite ahead of his heavyweight debut at odds of 2/7. He takes on former champion Fabricio Werdum who is a justified underdog despite his obvious credentials. The BJJ wizard is 5/2 heading into this one. After two years out due to a drug ban, Werdum looked poor in his decision loss to Aleksei Oleinik at UFC 249. Gustafsson hasn’t looked good lately either and is returning from a brief retirement. He isn’t a sure-fire thing in this one although we are backing him to stop a faded Werdum – at odds of 11/10. We wouldn’t totally rule out the Brazilian pulling off a submission, especially at odds of 15/2.

Former strawweight champion Carla Esparza and Marina Rodriguez will square off in one of the toughest fights to call of the night. In all likelihood, we will avoid betting on this. They are evenly matched. Esparza has some value as a slight underdog at 5/4. The only thing we can say with any essence of certainty is this fight will go the distance and will be close. That is something the bookmakers realize and have priced accordingly at 1/4 for this bout to go to the scorecards.

Another fight that’s too close to call for the oddsmakers who have priced both Paul Craig and Gadzhimurad Antigulov at 9/10. Again, we agree with the bookies and think this is a tossup. One thing is for sure whoever wins will likely score the submission victory. Craig has 12 professional wins, 11 of which have come by submission. He’s 11/4 to tap out the Russian who also boasts some pretty impressive ground skills. Antigulov has scored 15 submissions in his 20 MMA wins. He’ll be confident about getting another and at 3/1 may be worth adding to your bet. For us, we’ll be sitting back and enjoying this fight as it really is just guess work when it comes to trying to separate these two men.

Finally! A fight we feel confident in picking. Alex Olivera is a pretty safe bet in this one and we will be betting on him at 4/7. Although he was recently riding a three-fight losing streak he has been super active against top-level fighters. The same cannot be said for his opponent, Peter Sobotta who hasn’t been seen since suffering a knockout loss against Leon Edwards back in 2018. This is not the toughest fight back for the 11/8 underdog but one we think he will lose.

Khamzat Chimaev is the biggest favourite on the card at 1/10 to get the win and with good reason. He looked sensational when taking out Welsh middleweight fighter John Phillips in his UFC debut just a few days back. He wants to keep the train rolling against Irish standout Rhys McKee who has taken the fight on just 7 days’ notice. You’ll find him at odds of 6/1 but it all seems to be stacked against the 24-year-old. Unless Chimaev is seriously depleted by the cut to welterweight we envisage a quick stoppage victory. You’re probably going to have to pick the round if you’re hoping to make some money off of this one. We are going with the first round at 7/5.

Who are you betting on at UFC Fight Island 3?