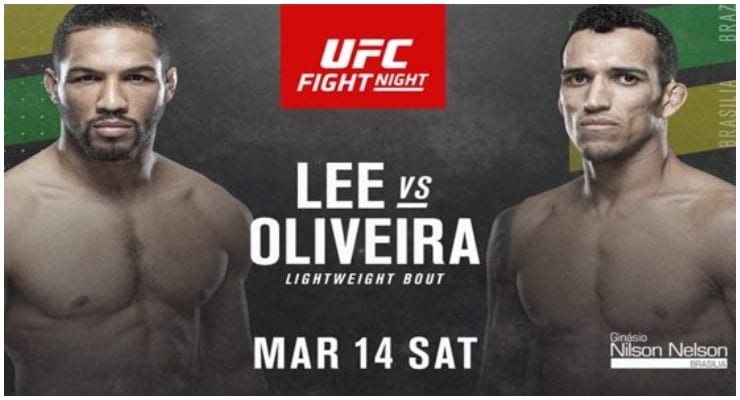 UFC Brasilia will be behind closed doors but the show goes on despite pretty much every other major sports promotion halting events this weekend.

In this main event we have catchweight bout after Kevin Lee missed weight by 2.5lbs for his fight against Brazilian submission specialist Charles Oliveira.

Lee returns to the cage for the first time since beating Gregor Gillespie with a highlight reel headkick KO. Oliveria looks to extend his winning run to seven and continue the best form of his UFC career. Check out our staff predicitons below.

READ MORE:  Diego Sanchez Details Hospital Battle: 'No Fight Camp Or Opponent Has Dominated Me Like This'

Ryan Galloway: UFC Fight Night Brasilia’s main event showcases a lightweight matchup between Kevin Lee and Charles Oliveira. Oliveira has been on a tear lately however I believe Kevin Lee will be too much for him. I think Kevin Lee’s striking will be the difference in the bout and that he will be able to find the finish on the feet. (Prediction: Kevin Lee)

Cole Shelton: Kevin Lee vs. Charles Oliveira is a fascinating fight. In this one, I think Oliveira’s path to victory is to submit Lee but with Lee’s takedown defense I believe he’ll be able to keep to standing like he did with the Gillespie fight and piece up Oliveira for the entire fight and eventually rock him and for Lee to earn a third-round TKO. (Prediction: Kevin Lee)

Jordan Ellis: This main event match-up will ultimately come down to size in my opinion. Kevin Lee is in desperate need of the 165lb division as one of the bigger guys at lightweight. Charles Oliveira on the other hand has fought at 145lbs and isn’t the most built guy at this weight. I expect Lee to use his size, dictate the fight and avoid the nasty submission game of his Brazilian opponent. Ultimately, I expect Lee to get the stoppage win and snap the long winning run of Oliveira. (Prediction: Kevin Lee)

Abhinav Kini: Although many have missed weight and ended up winning, I don’t see the same happening for Kevin Lee. I think Charles Oliveira will be too much to handle on the feet and the fight will eventually go to the ground where Lee will get submitted (Prediction: Charles Oliveira)

Who do you thin will take the UFC Brasilia main event?