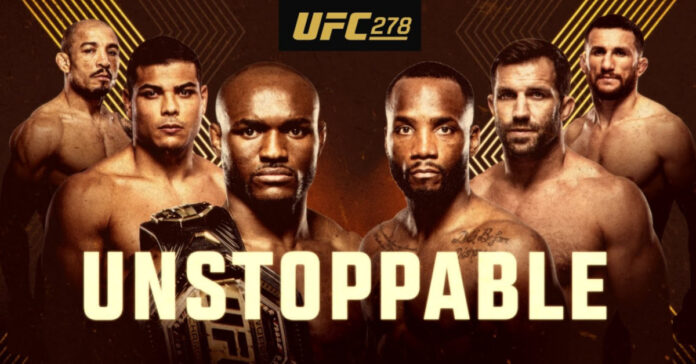 UFC 278 is finally upon us, and we at LowKickMMA are here to give you our top 3 bets for this PPV event.

Kamaru Usman and Leon Edwards clash in an electric main event whilst former champ Luke Rockhold squares off with Paulo Costa in the co-main. A future Hall of Famer in Jose Aldo will share the cage with rising contender Merab Dvalishvili, and an undefeated heavyweight prospect named Alexandr Romanov faces a big litmus test as he takes on Marcin Tybura.

Join us at LowKickMMA as we break down three of our best bets for UFC 278!

Our first pick will be for Brazilain powerhouse Paulo Costa to KO/TKO former UFC champ Luke Rockhold. The reasoning behind the bet is simple. Paulo Costa is a freak athlete with tons of power. Luke Rockhold is now 37 years old, and has been knocked out in three of his last four.

We’re taking Costa by KO/TKO, which is priced at 1.61 on Betway.

It’s very rare that a fighter with such skill and prestige as Jose Aldo is an underdog. However, the reasoning behind it in this case is understandable, as the King of Rio is taking on tenatious up-and-comer Merab Dvalishvili. The surging Georgian is one of the best wrestlers in the division, which, when paired with an inexhaustible gas tank, makes him a major threat to every fighter in the top 15.

But Jose Aldo has made a career off of defeating pressure-based wrestlers. The former 145lb champion has overcome the likes of Chad Mendes and Frankie Edgar, two of the best to do it, in their primes no less. If Aldo can keep the fight standing, there is no reason to think that he won’t just light Merab up on the feet.

This bet could be a bit dicey, but Aldo has all the tools necessary to win this fight. We will take his ML which Betway have priced at 2.10.

Our final bet is a parlay between three favorites on this card.

First is Alexandr Romanov, an undefeated 16-0 Moldovan UFC heavyweight who takes on Marcin Tybura. Romanov’s wrestling and top control is of an elite caliber, and he will likely dominate this fight from the get go. Look for an early ground and pound finish from ‘King Kong.’

Second is Sean Woodson. ‘The Sniper’ lives up to his nickname every time he steps in the octagon. His long arms allow him to utilise his excellent long-range boxing game, which will cause his opponent, Luis Saldaña, non stop trouble.

To round out our parlay, we are backing Amir Albazi to defeat Francisco Figueiredo. Albazi is one of top prospects in the division, and whilst his opponent may have a famous surname, he is not the fighter his brother is. Albazi should have the advantage in this fight wherever it goes.

A parlay consisting of these three UFC fighters can be found at 1.92 odds on Betway.