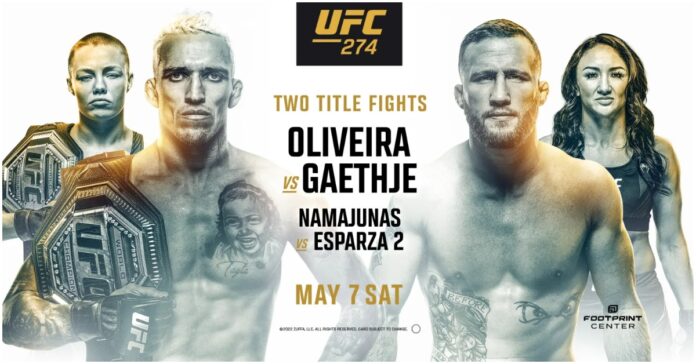 UFC 274 represents a return to Phoenix, Arizona, for the promotion, headlined by an electric lightweight title fight. 155lb champion Charles Oliveira will take on ‘The Highlight,’ Justin Gaethje.

In the co-main event, strawweight champion Rose Namajunas faces off against Carla Esparza, in a rematch eight years in the making. Esparza came out on top the first time around, but Namajunas has improved exponentially since then.

UFC 274 is jam-packed with a variety of prospects, veterans, and fan-favorite fighters with the likes of Tony Ferguson, Michael Chandler, Donald Cerrone, Randy Brown, and many more all set to appear on this eagerly anticipated PPV card.

Join LowKickMMA as we preview, predict, and hopefully win some money betting on UFC 274.

In the main event of UFC 274, Charles Oliveira takes on Justin Gaethje in what could be one of the most dynamically exciting fights of the year. There are a number of ways you could play this fight, as in many ways this is almost a coin flip fight. Justin Gaethje is the current underdog, and if you’re backing him to win this one, then taking his KO line at 3.10 on Betway is the way to go.

However, we will be backing the favorite in this one. Charles Oliveira’s ML is at 1.57, whilst his submission prop sits at 2.40.

This is a simple pick to make. The Lowkick MMA Staff predictions gave Namajunas a 100 percent chance to win, and whilst she is a relatively heavy favorite, there is still value on her Money Line. Esparza is at a significant size disadvantage, and will be outclassed on the feet. Admittedly, she does have an extremely high-level ground game, but in Namajunas’ recent rematch with Weili Zhang, she demonstrated her defensive wrestling prowess. Pair this with a dangerous submission threat, as well as her possessing a better gas tank than Esparza, and there is no logical choice but to go with ‘Thug’ Rose.

In the opening fight for UFC 274’s main card, two veterans of the sport will lock horns. If fighters like Cerrone and Lauzon are not willing to hang up the gloves just yet, then these are exactly the sort of fights they should be in. We will only take a small sprinkle in this fight, banking on the early explosivity of Lauzon, and the seemingly compromised chin of Cerrone.

Two extremely exciting and talented welterweights clash in the featured prelim of UFC 274. Despite having won four of his last five, Randy ‘Rudeboy’ Brown comes into this fight against Khaos Williams as the betting underdog. Williams is a dangerous fighter with legitimate knockout power. However, Brown is the much more well-rounded martial artist. He is also an expert at utilizing his length, which will allow him to pick apart Williams in this fight.

There is a legitimate chance that Williams knocks out Brown, but if he doesn’t, then expect ‘Rudeboy’ to continue piecing up Khaos for the entirety of the fight. You can take Brown’s ML, but we will be going for his decision prop, priced at 3.75 on Betway.