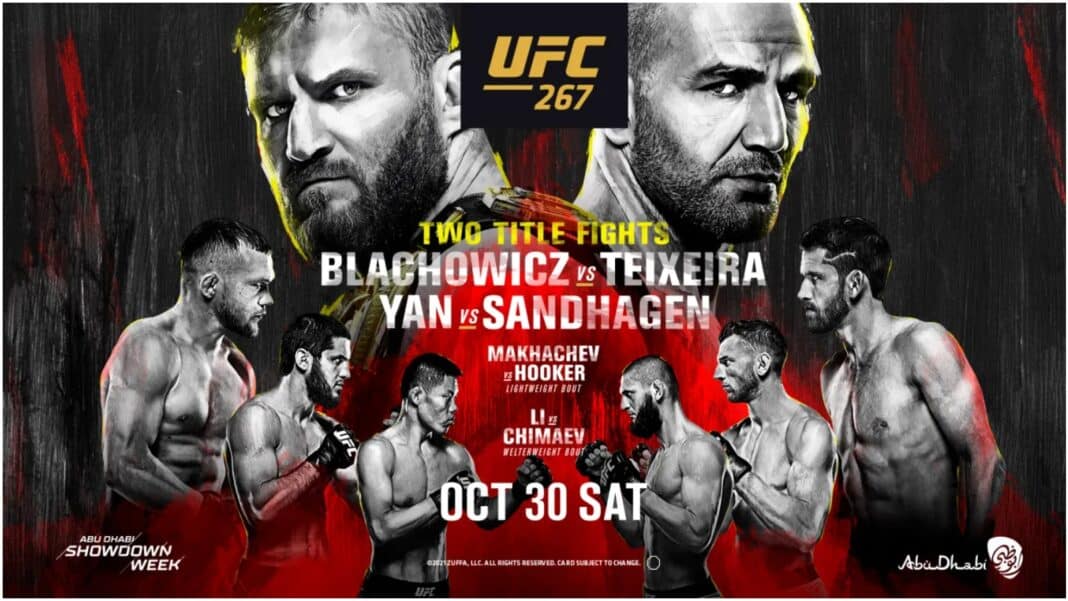 After a month of less than impressive fight cards, the UFC is finally back to its brilliant best on October 30 with UFC 267 which boasts two title fights and a bumper undercard that will all be free to watch this weekend.

In the main event of the evening, Jan Blachowicz will aim to make a second successful defence of his light-heavyweight title. Glover Teixeira is the man tasked with stopping the streaking European, in his second shot at 205lb UFC gold.

Before that, Petr Yan will look to quickly become a champion once again after losing his bantamweight title earlier this year due to being disqualified from his UFC 259 fight against Aljamain Sterling. ‘The Funk Master’ was unable to make his rematch booking with Yan, so in steps Cory Sandhagen for a shot at arguably the best 135lb fighter on the planet and the chance to win the interim bantamweight title.

Away from the title fights, we have a three-round bout between two of the best lightweight on the planet in Dan Hooker and Islam Makhachev. Khamzat Chimaev also makes his eagerly anticipated return to action when he takes on Li Jingliang.

Join LowKickMMA as we preview, predict, and hopefully win some money betting on the UFC 267 main card.

If you’re going to follow our picks, be sure to check out odds trading to ensure you always get the best payout.

According to the bookmakers, Jan Blachowicz has a relatively easy light-heavyweight defence at UFC 267. The Polish knockout artist is priced at -300 to retain his title against +240 underdog Glover Teixeira. While we agree Blachowicz is likely to defend his title we also find these odds somewhat disrespectful to the Brazilian who has more than earned his second shot at UFC gold. Teixeira has won five successive fights, beating the likes of Thiago Santos and Anthony Smith on his way back to title contention. He won’t be a pushover. However, we simply cannot bet against the champ right now. Blachowicz is in the form of his life and will definitely be going on our parlay. Although you might want to look into alternatives rather than straight betting on this fight as -300 offers no value for bettors.

This is another fight we think the bookmakers are off on to some degree. Petr Yan is arguably the best bantamweight fighter on the planet right now. The Russian was well on his way to beating Aljamain Sterling before he was unfortunately disqualified from the bout and therefore lost his title. However, Cory Sandhagen is for our money the toughest opponent he could currently face. Stylistically he could prove a nightmare of the former champ and we’re sure plenty of people will be fancying him to cause the upset at +220. However, we won’t be doing that. Although the -222 odds are a little short we still think Yan is a good bet at UFC 267. We expect him to prove he is still the best at 135lbs by making a statement against arguably his toughest opponent to date.

Once again, the bookies are getting carried away with the hype. Islam Makhachev has been impressive for the majority of his UFC career, but Dan Hooker is a couple of levels above any opponent the Russian has ever faced, and in no way, shape, or form should he be a monumental +450 underdog going into this one. Not long ago Hooker pushed Dustin Poirier hard for five rounds. Makhachev, although likened to Khabib Nurmagomedov by many, has not yet proven he is of that caliber and it’s hard to justify betting on him at -600. For that reason, we’ll be having a dabble on Hooker who might just derail the latest Dagestani hype train at UFC 267.

This is a pretty straightforward fight for us. Alexander Volkov is the -330 favourite and justifiably so. The Russian has mixed it at a higher level and beaten people who are superior fighters to the +250 underdog Marcin Tybura. Volkov isn’t known as a big puncher but we wouldn’t be surprised to see him stop Tybura this weekend.

This is a great piece of matchmaking by the UFC. Khamzat Chimaev has wanted to rush through the ranks, but Li Jingliang is the right opponent at the right time. Chimaev is a pretty big favourite at -450 and again, it’s probably not worth betting on that price. However, we expect him to be pushed in this fight by the +350 underdog, maybe even stretched for the full three rounds. Perhaps Chimaev by decision is the way to go if you want to bet on this one.

This one has got banger written all over it. Magomed Ankalaev is the new breed of light-heavyweight and highly fancied by the bookies at odds of -350 against Volkan Oezdemir who you can get at +275. This is undoubtedly the toughest test of Ankalaev’s career and we won’t be betting on him at those odds. However, Oezdemir hasn’t fought since suffering a brutal KO loss in June 2020. It’s hard to make a pick on this one so we might just sit back, relax and enjoy the carnage that these two will almost certainly bring at UFC 267.