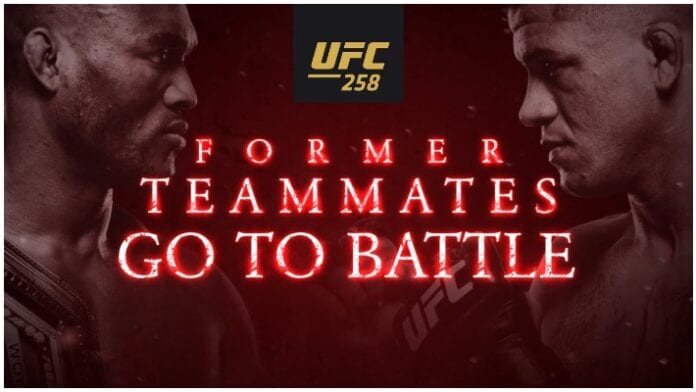 In the UFC 258 main event, Kamaru Usman will look to make the third defence of his welterweight title against Gilbert Burns who was previously a long-time training partner of ‘The Nigerian Nightmare’.

Away from the main event we have a stacked night of fights from Las Vegas this coming Saturday evening. Especially interesting is the UFC 258 undercard which is full of unmissable matchups.

Join LowKickMMA as we make our picks for the UFC 258 undercard bouts.

If you’re backing our fight night picks head to meta.reviews. for the best betting offers.

Opening up the UFC 258 early prelims is a super interesting fight between two exciting flyweight prospects.

Gillian Robertson seems to have been a key player in the flyweight division for a while now, but is still just 25 years old.

Unfortunately for Robertson things haven’t gone to plan when she has stepped up her level of competition. Last time out she dropped to a decision defeat against Talia Santos. Robertson also has defeats against Cynthia Calvillo and Maycee Barber.

Miranda Maverick will be the slight -150 favourite in just her second UFC bout. The 23-year-old was super impressive in her promotional debut last year – forcing the stoppage win against Liana Jojua.

Before joining the UFC, Maverick was an Invicta flyweight tournament winner. She holds victories over the likes of Pearl Gonzalez, Victoria Leonardo and DeAnna Bennett.

It a really tough fight for Maverick but one we expect he to come through in style. So we’ll be adding the youngster to our UFC 258 undercard bet.

Another UFC 258 undercard fight another clash between two interesting prospects. Gabriel Green lost in his UFC debut last time out but looked good in spurts against Daniel Rodriguez. He clearly impressed the bookmakers who have him the -138 favoruite heading into this one.

In his highly anticipated UFC debut, we are backing the underdog to emerge victoriously from a very tough fight.

In this middleweight match-up we expect Rodolfo Viera to make good on his favourite tag. The undefeated prospect has picked up back-to-back submission wins since joining the UFC. He’s a BJJ wizard and well worthy of his -400 odds tonight.

The +300 underdog, Anthony Hernandez should provide a tough test for Viera. During his MMA career the 27-year-old has picked up significant wins over Brendan Allen, Jordan Wright and Jun Yong Park.

Ultimately though, we expect Viera to have too much for him. So, we’ll be betting on the Brazilian to score the stoppage win at oods of -225.