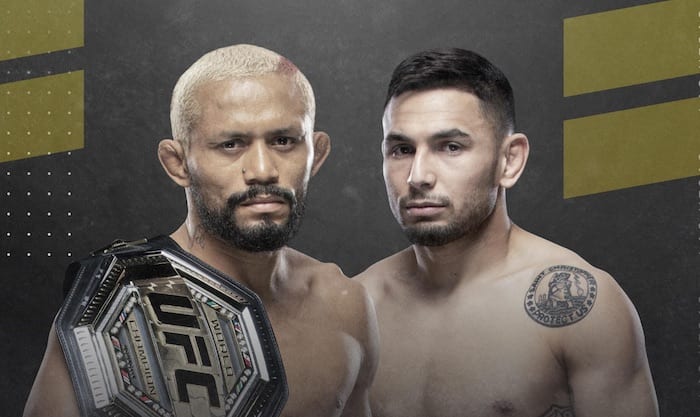 UFC 255 is set to be a showdown between two big time stars. Deiveson Figueiredo will take on Alex Perez at the UFC Apex on November 21, 2020. The main card begins at 10:00 p.m. E.T. This fight is not a title match, but it features two of the highest ranked fights in the flyweight division. Figueiredo is the current flyweight champion, while Perez sits at No. 4 in the rankings.

If Perez can win, this will likely set up another pay-per-view event that would be a title fight. If not, then Figueiredo will retain the title further. Either way, it’s going to be a tough battle for Perez, so let’s take a look at the preview of this upcoming fight.

Figueiredo enters the UFC betting line as the favorite with -290 odds, while Perez sits at +255. Figueiredo enters the fight with an overall record of 19-1 and has won nearly 50% of his fights by knockout. He has won six of the last seven fights. He is coming off a victory over Joseph Benavidez, which was fought in July. At 33 years old, Figueiredo has proven that he is one of the best fighters in the division. He will look to cement his legacy against the No. 4 ranked Perez when the two fight in Las Vegas.

Perez enters this fight with an overall record of 24-5 with over 50% of his fights won by major decision. He has won 11 of the last 12 fights. Perez is coming off a win over Jussier Formiga back in June. Perez is 7-1 over the last four years under the UFC and this will be his second overall fight in Las Vegas. This is a critical fight in the 28-year old’s career because it could lead to a title fight if he can pull off the upset.

Figueiredo is averaging 2.80 significant strikes per minute with an accuracy percentage of 55%. He surpasses 50% with an average success rate of 1.71 takedowns per match. In 2020, Figueredo is undefeated and could win his third fight this year if he takes this contest. Figueiredo is a skilled fighter on his feet, but he owns seven career submission wins.

As for Perez, he is averaging 4.68 significant strikes per minute with an accuracy percentage of 47%. It will be interesting to see if Perez tries to speed up the pace of this fight given that he averages nearly two more strikes than Figueriredo. Perez also averages 2.03 takedowns with an accuracy rate of 50%. AT UFC 250, Perez secured a first-round knockout, which was his second straight knockout win.

Don’t let the eye-popping stats fool you. Stay away from the underdog on this one. The best play is going with Figueiredo on this one. No matter what, this should be a fun fight between two of the more underrated fighters in the UFC. This is going to be decided by major decision as both fighters have shown they have the stamina to advance through five rounds.
The difference here is that Figueiredo has a much more balanced resume as a fighter. With his stout wrestling career, he owns more of an advantage to get Perez to the ground. Perez may have the edge on overall striking, but Figueiredo has improved over the years. Not to mention, he has the longer reach, so Perez will have to get his strikes at a close distance. That opens up Perez to be taken down. Look for Figueiredo to win No. 20 at UFC 255.