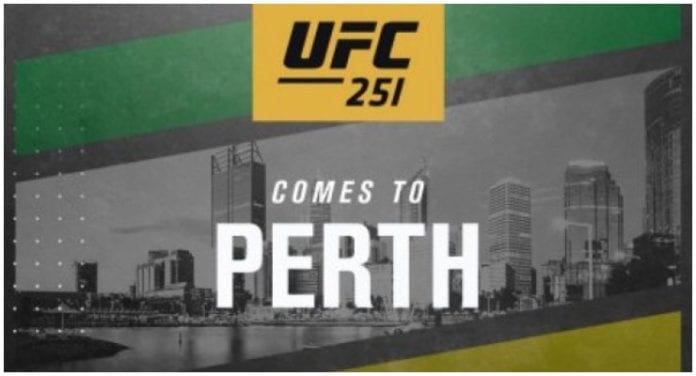 The upcoming UFC 251 show set to take place in Perth, Australia has been postponed due to the ongoing coronavirus pandemic.

UFC 251 was reportedly set to be headlined by featherweight champion Alexander Volkanovski who was in negotiations to face former 145lb king Max Holloway in a highly anticipated rematch. Volkananovsk previously beat ‘Blessed’ by unanimous decision at UFC 245 to win the title.

In the co-main event women’s flyweight champion Valentina Shevchenko was due to defend against Joanne Calderwood before she was forced to withdraw due to a leg injury. The only other fight that was official for the card was a heavyweight bout between Tai Tuivasa and Jarjis Danho.

The MMA promotion took to social media to announce the card has been temporarily shelved due to an Australian ban on public gatherings, it read.

“Due to current state and national restrictions on public gatherings and travel, UFC 251 originally scheduled for Perth, Western Australia on Sunday, June 7 has been postponed.

“UFC looks forward to returning to Perth in the near future with a PPV event in partnership with tourism western Australia. Fans can register their interest to receive date, ticketing and bout information at UFC.com/Perth.”

It’s unclear right now when or if the event will be rescheduled.