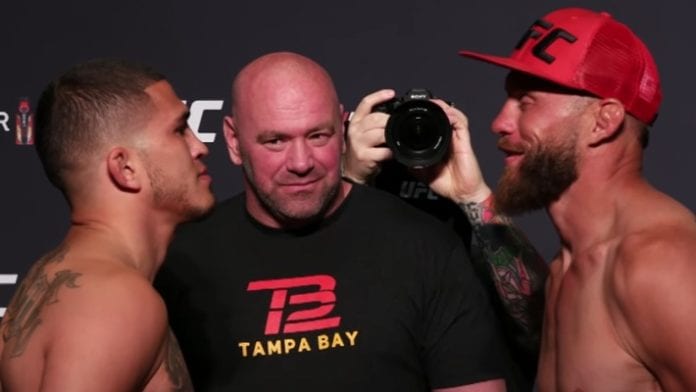 Completing the prelims of UFC 249 is a welterweight affair between Anthony Pettis and Donald Cerrone.

Round 1: The pair start things off by reading and feeling each other out. They connect with a number of leg kicks. Cerrone misses a big swing. Pettis attempts a kick which misses and Cerrone has his back. Pettis eventually separates and they return to striking. Pettis lands a huge head kick but Cerrone eats it and lands the takedown and is in side control. Pettis tries to scramble and eventually gets to his feet. Cerrone lands a nice combination which is responded with a left strike from Pettis. Pettis misses a spinning back kick.

Round 2: Pettis seems to have the upper hand as he lands a number of strikes. Cerrone responds with a leg kick. Pettis stings Cerrone with a left hand. Cerrone lands a stinging leg kick as Pettis misses a spinning backfist soon after. Cerrone feints a takedown attempt but returns to striking. Pettis lands a jumping switch kick to the head but Cerrone seems to be fine. They exchange leg kicks. Cerrone lands a big body kick. Pettis responds with two body kicks of his own. Cerrone aggressively attempts and lands the takedown. Pettis gets to his feet but is clinched up against the fence. Pettis escapes and blocks a high kick while doing so. Cerrone lands a teep to the body as the round ends.