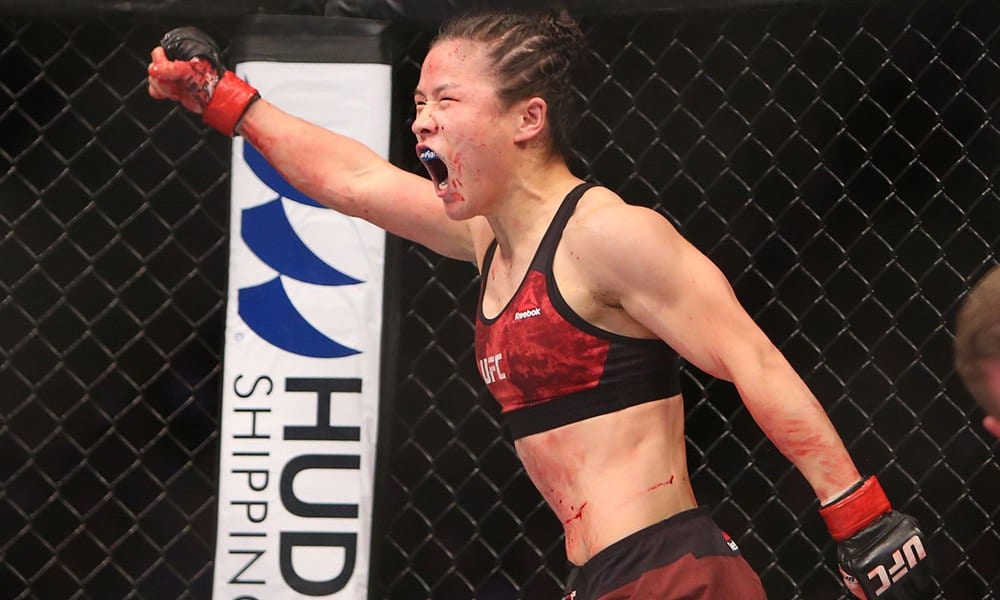 The women will take center Octagon next as Tecia Torres and Weili Zhang will go to war in an important strawweight contest.

As always, LowkickMMA will have you covered with all of the UFC 235 results as they break.

Torres (10-3) is riding a two-fight losing streak heading into this weekend’s contest. “The Tiny Tornado” will look to get her hand raised for the first time in over a year on Saturday night.

As for Zhang (18-1), she will make her third walk to the Octagon in just seven months on Saturday evening. Begging the question, is it too much too soon for the Chinese fighter?

The women take to the center of the Octagon with Torres pressing forward. Zhang throws a leg kick out and follows it with a spinning punch that misses. Zhang throws a sidekick but Torres easily steps aside. Not much action from either fighter thus far. Good footwork from both women early on. Spinning back kick lands for Zhang. Zhang lands a trip but Torres muscles out and up to her feet. She cracks Zhang with a right hand for her effort. A wayward spinning attack from Zhang misses Torres. Zhang grabs Torres and looks for a takedown. Torres defends but Zhang gets on her back and sinks in her hooks. Torres presses Zhang up against the cage as she stands. Zhang loses her hooks and Torres lands a right hand on the break. Zhang with a sneaky trip and some elbows as the round .

The women trade punches to start round two. Zhang settles into the center of the cage and lands a side kick followed by a low kick. She lands a spinning back fist to boot. Torres uses her footwork to evade another spinning attack. Zhang presses forward using her lead foot like a punchers jab. Torres lands a left hook over the top. Zhang presses forward with kicks and lands a right hand. Torres pumps the jab. Torres throws an ax kick that misses the mark, she lands a one-two through. The women clinch with Zhang getting the better and dragging Torres to the canvas. She lands some left hands but Torres reveres position. 45 seconds left in the round. Torres is in Zhang’s guard and is trying to land but time runs out.

The women touch gloves to start. Torres lands a side kick of her own to start the round. Zhang throws one of her’s. She lands a one-two that stuns Torres. Torres lands a right hand that hurts Zhang. Good start to the last round for these fighters. Zhang another spinning attempt but Torres catches her kick. They break and Torres lands a right. Zhang closes the distance and trips Torres. She ends up in side control with two minutes left to go in the fight. She moves to half guard with double under hooks. Zhang lands some ground and pound. She is mauling Torres with short elbows and punches as the fight ends.