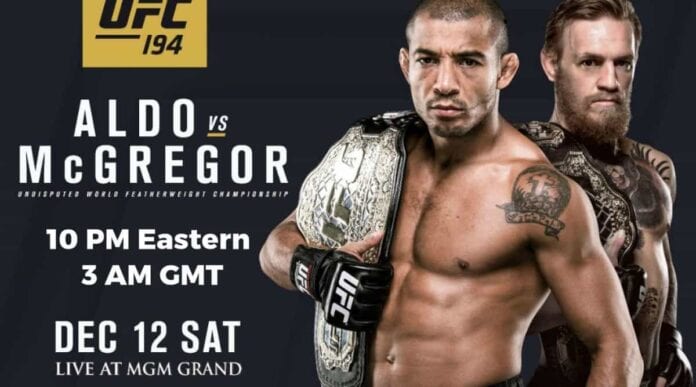 The biggest fight of 2015 and some would say of all-time is finally here, and I have to admit that it’s probably not only the greatest UFC featherweight title fight ever but also the closest. Aldo is Aldo, the peerless destroyer who’s undefeated in the UFC as the only true 145-pound champ ever known. Yet he’s seemed to trail off a bit in recent years; fighting less and less, getting injured more and more, and coasting his way to dominant decision wins when he seemingly could have put his opponents away early. McGregor has obviously done the exact opposite, plowing through a nonstop stream of improving opponents on his way to winning the interim belt over Chad Mendes.

This fight will be a war; I don’t see either one giving an inch. Aldo could surprise by refusing to let his emotions get the better of him and wrestling ‘Notorious’ to the ground, while McGregor will want to stand and trade heavy and varied blows. It’ll all come down to whomever can implement their gameplan the best, and I see this one lasting to the final bell. It’s ultra-close but I’m going with Aldo by unanimous decision.

The inevitable fight weekend is finally here, yet still I find myself pondering on who will emerge victorious between Jose Aldo and Conor McGregor. Strip away all the hype and noise, and you have two highly skilled fighters with contrasting styles. The battle for the jab could prove pivotal for Aldo, as he faces the southpaw with a longer range and a unique stance. Low kicks will also be the way forward, although again they might be hindered by the Irishman’s opposite stance. I personally feel Aldo might need to get this fight grounded if he wants a win, as ‘The Notorious’ is just way too unpredictable to kickbox against. With that essentially being the key to victory for ‘Scarface,’ I see the champion making this a gritty and ugly fight. It’s very tough to call, but I’m taking Aldo by decision.

Behind all of the hype and all of the talk, I truly feel as if McGregor is an elite level fighter. The Irish star, while having shown some possible signs of a ground game that may need improvement, has proven to be a high level striker. McGregor uses fluent and unpredictable movement and seems to attack from nearly every angle. That coupled with his devastating power makes him a serious threat here. However, he is going up against one of the pound-for-pound best in Aldo, a man who hasn’t lost in a decade. Aldo is extremely well rounded, as he possesses vicious striking skills, extremely strong takedown defense, as well as world-class ground skills. While I’m not counting out the long reigning champion, I just have to go with my gut here and I feel as if the “Notorious” one’s reach and power get the job done here. McGregor via third round TKO.

It’s both insane and awesome that I’m picking Weidman vs. Rockhold as a co-main event fight, because this is undoubtedly one of, if not the, greatest middleweight title fights of all-time. The trash talk and story behind this fight has understandably taken a backseat to Aldo vs. McGregor, but it seems as if Weidman and Rockhold were destined to fight it out in the octagon ever since they began fighting in MMA.

That time is now here, and this is another super-close fight that is tough to predict. Weidman has the wrestling advantage, but Rockhold’s slick ground game should make taking him down a bit more dangerous than Weidman’s prior opponents.

The undefeated champ thinks his jiu-jitsu is better than Rockhold’s, so he may want to test his ground skills with a takedown early. On the feet, Weidman possesses a power advantage but is not as fluid, technical, or fast, as the ultra-smooth Rockhold. That most likely means the champ will want to pressure ‘Rocky’ early, so it’s on the AKA standout to prove he can respond in the face of that pressure. While he has the angles and footwork to stay clear of Weidman’s aggression, I don’t think he’s dealt with a fighter the caliber of the brutalizing champ here. I believe Weidman makes a statement with a first round TKO.

Luke Rockhold’s UFC 194 open workout showed the former Strikeforce middleweight champion on top form, and Chris Weidman looked particularly smaller than usual, and didn’t really give much away on the pads. ‘Rocky’ has developed great kicks over the years, and I just sense a changing of hands in the co-main event of UFC 194. Of course ‘The All-American’ could well prove me wrong, but I just feel like Rockhold will keep him at range. Another very tough call, but I’m going with my gut and saying Rockhold by decision.

In my opinion, Luke Rockhold is without a doubt the biggest threat to Chris Weidman’s throne. Rockhold is quite well rounded, showing strengths in all areas. On the feet, he uses his southpaw stance and reach quite effectively, and on the ground he has shown strong submission skills. “Rocky” has also improved his wrestling, but once again I have to go with my gut and pick the champion here. I feel as if Weidman is the superior wrestler and I feel as if his relentless pressure on the feet will make the difference here. Weidman via unanimous decision.