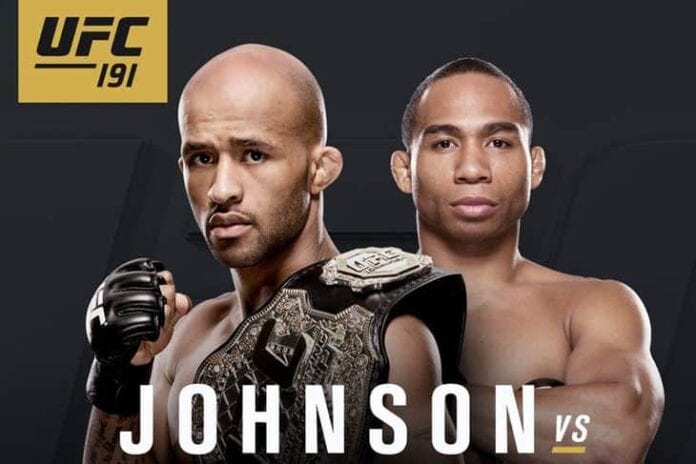 It’s once again fight day here at LowKickMMA, and the talent on display tonight (Saturday, September 5th, 2015) will come from the MGM Grand Garden Arena in Las Vegas, Nevada, in the form of UFC 191. Headlining the card are Demetrious Johnson and John Dodson, but there’s a whole bunch of great fights also taking place on the preliminary section of the card.

Paul Felder vs. Ross Pearson closed out the preliminary card on Fox Sports 1 in a lightweight bout. This was a solid fight that saw some decent action and Pearson get his hand raised by split decision as the fight could’ve gone either way.

John Lineker vs. Francisco Rivera was next in a bantamweight bout. This fight marked Lineker’s bantamweight debut and it was impressive. A minute into the first round, all hell broke loose. These two exchanged in the pocket with Rivera being hurt and Lineker tried to finish him, but couldn’t. After Rivera got to his feet, they exchanged some more with Linker grabbed Rivera’s neck and locking a guillotine choke for the win.

Jessica Andrade vs. Raquel Pennington was next in a women’s bantamweight bout. After a wild exchange in the first round, Andrade was tired and Pennington took advantage of this by taking her down, getting her back and locking the rear-naked choke for the win just before the bell sounded in the second round. Let the mind control the body, not the body control the mind.

Clay Collard vs. Tiago Trator opened the Fox Sports 1 preliminary bouts in a featherweight bout. Yet another action packed, but close fight. Tractor was the more smarter fighter in this fight and that’s really what cost Collard this fight. He threw too much volume in his strikes and didn’t connect with those, which opened him up to punishment. Tractor won this fight by split decision.

Joe Riggs vs. Ron Stallings in a middleweight bout finished off the UFC Fight Pass preliminary card. In a decent fight that ended strange, Stallings hurt Riggs’ right eye in round one, which bothered him throughout the fight. However, in round two, Stallings landed an illegal up kick while the two were on the ground and the fight was stopped. Riggs won by DQ.

Opening the UFC Fight Pass prelims was Nazareno Malegarie vs. Joaquim Silva in a lightweight bout. Mostly a stand up fight that saw Silva out strike his opponent. Silva had fifty-four significant strikes in this fight. He ended up going the distance with Malegarie and winning the fight by split decision.