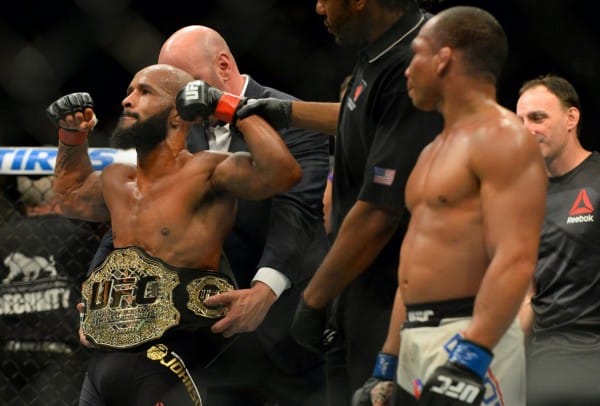 There’s been a seemingly never-ending discussion about UFC flyweight champion Demetrious ‘Mighty Mouse’ Johnson’s ability to carry a pay-per-view (PPV) card, and based on the reported gate of his latest title bout against John Dodson in the main event of last weekend’s (Sat., September 5, 2015) UFC 191 from Las Vegas, the numbers might suggest that there’s some validity to his doubters.

Taking place at MGM Grand’s Garden Arena and being overshadowed in a big way by the Conor McGregor-dominated ‘GO BIG’ press conference directly before the weigh-ins, UFC 191 only brought in a live gate of $1.3 million, making it the lowest-drawing gate for a Las Vegas-centered UFC PPV in 11 years dating back to UFC 49 in 2004 according to Bloody Elbow.

‘Mighty Mouse’ has drawn lower gates before, as his previous title defense against Kyoji Horiguchi at May’s UFC 186 drew only $668,000 in Montreal, and his UFC 174 win over Ali Bagautinov in Vancouver, British Columbia, brought in a gate of $1.14 million.

His UFC 178 win over Chris Cariaso gained a respectable gate of $2.2 million, but it’s important to note that the card was originally headlined by the anticipated Jon Jones vs. Daniel Cormier light heavyweight grudge match, and Conor McGregor also took on Dustin Poirier at the event.

There were also reports that fans were leaving the MGM Grand Garden Arena after the disappointing Andrei Arlovski vs. Frank Mir co-main event, evoking a similar scene as his win over Bagautinov.

For some reason, MMA fans just can’t seem to get behind ‘Mighty Mouse,’ and that’s a shame because it’s clear that he’s one of the finest pound-for-pound fighters on the planet. However, he does little to promote himself or his fights, and the UFC doesn’t seem to be getting behind him at all with much louder stars like McGregor and Ronda Rousey ruling the roost.

Is the blame on the fans and/or the UFC, or is it on ‘Mighty Mouse’ to beginning boosting himself up as we’ve seen is necessary in today’s Internet-driven fight game?