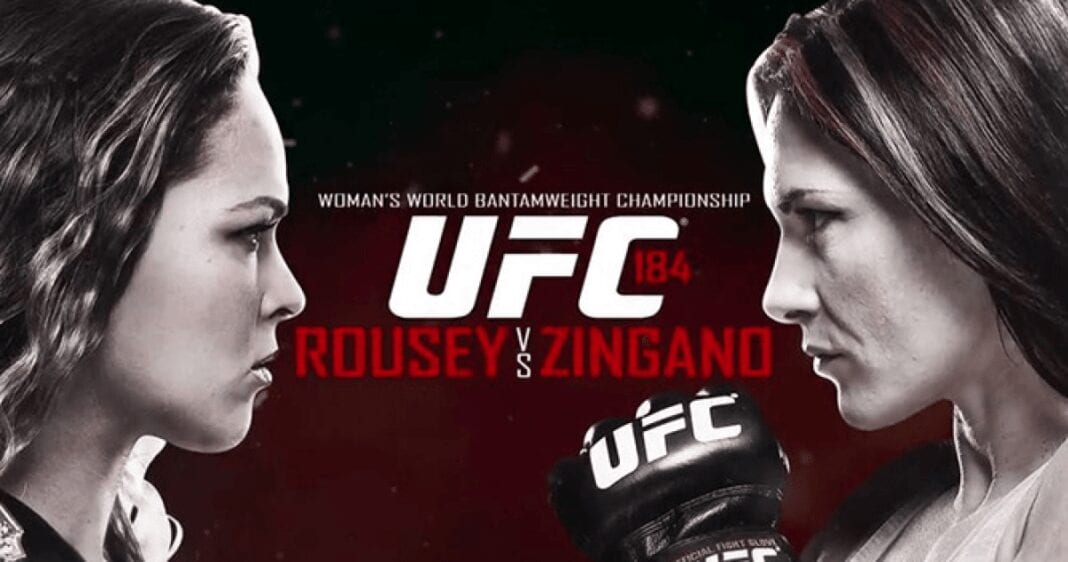 Tonight’s UFC 184 pay-per-view (PPV) main card is in the books from the Staples Center in Los Angeles, California.

The event features a pivotal women’s bantamweight title headliner between dominant undefeated champion Ronda Rousey and longtime No. 1 contender Cat Zingano. ‘Alpha’ went for a flying knee early on and that spelled her demise. ‘Rowdy’ caught her up in a clinch and flipped her over into her back, securing a slick straight armlock to earn a quick tapout from Zingano in addition to the quickest-ever finish the UFC has ever seen.

The world witness the long-awaited UFC debut of touted former boxing champ Holly Holm, who battled The Ultimate Fighter (TUF) veteran Raquel Pennington in the co-main event. ‘The Preacher’s Daughter’ threw some combinations to start the fight, landing a few side kicks and fending off some takedowns; but she didn’t really connect with anything significant. Pennington clinched as she pressured Holm but failed to score many points.

‘Rocky’ landed a stiff right hand and a strong low kick at the start of the second, with Holm countering with a few kicks of her own. The women traded strikes in the center of the Octagon, and Pennington snapped Holm’s head with two stiff strikes. Holm kept up the light strikes to score points towards the end of the round. Holm peppered Pennington in the third but ‘Rocky’ fought back with a big shot. She followed with another that floored ‘The Preacher’s Daughter’ and landed more punches to bloody her nose, but it wasn’t enough as Holm took home a unanimous decision win in her UFC debut.

Jake Ellenberger and Josh Koscheck faced off in a pressure-filled welterweight affair where both fighters were potentially fighting for their job. ”Kos’ came out aggressive but ate a jab, walking through another one to secure a strong double leg takedown. The former title challenger clinched for a bit before Ellenberger landed left and right hooks as ‘Kos’ shied away from action as the round came to an end. Koscheck sought a takedown in the second, and a restart saw Ellenberger land a quick combo as Koscheck snapped a left. Another takedown attempt was defended, and Ellenberger capitalized with a tight North-South that Koscheck stayed in for a long time before tapping out late in the second round.

Talented welterweight prospect Alan Jouban met Richard Walsh, and the fighters traded power strikes early on. Walsh was aggressive with kicks and knees to the body. Jouban soon turned the tables, however, as he nailed Walsh with a massive elbow to the head and some vicious lightning-fast punches to earn an immediate stoppage from referee John McCarthy.

The main card got started off with a lightweight match-up between Tony Ferguson and Gleison Tibau. The surging Ferguson nailed Tibau with several varied strikes earlier, rocking him with a right hand and following him to the ground to lock on a decisive rear-naked choke for the impressive victory.