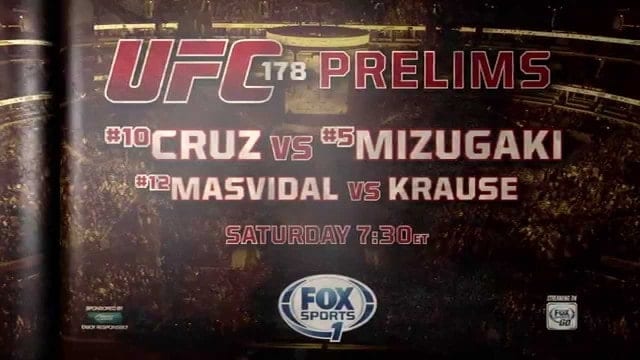 It’s fight day here at LowKick, as UFC 178 is finally upon us. The stars of the show will grace the octagon tonight (Sept. 27th, 2014), with the prelims action getting underway at 7 PM ET.

Headlining the FS1 section of the preliminaries was returning former bantamweight champion Dominick Cruz. “The Dominator” has been out of action for the past three years now, and he absolutely smashed Takeya fellow WEC veteran Takeya Mizugaki tonight.

Jorge Masvidal and James Krause fought an exciting three-rounder in the lightweight division, with “Gamebred” outworking Krause in all aspects. A hard unanimous decision win for Masvidal.

Also featured on the FOX prelims was a lightweight spectacle between Stephen Thompson and Patrick Cote, with “Wonderboy” emerging the winner by UD. Kevin Lee and Manny Gamburyan were successful on the Fight Pass prelims, and Brian Ebersole won a close split decision over John Howard on FOX.

So join us here at LowKick for the UFC 178 prelims live results & fight-by-fight analysis!

135 lbs.: Dominick Cruz def Takeya Mizugaki by knockout round one

This is surreal! Cruz is dancing now, but Mizugaki pops him with a right, wow a huge takedown by Cruz, and he has the back, holy crap! Mizugaki is rocked with ground and pound, and Cruz gets a knockout from the back!!!! INSANE! What a thoroughly brutal return by “The Dominator”…

Dominick Cruz back in dominating form, with a monstrous first round knockout win, that was awesome!

Cagey opening here for both guys, now they start trading. Leg reaches are being measure now apparently. Huge kick to the gut by “Gamebred”, and returned by “Mean”.  Masvidal tagging Krause now, and they in-fight. Now they trade hard, but it’s very close to call….

Masvidal working the body, but Krause is cracking that chin. Masvidal reverses nicely on the mat, they stand and Masvidal is unloading on Krause now. “Gamebred” rocks him with the headkick, they scramble and Krause takes the back. Great fight, and very close, and now Krause is DROPPED! It was the right hook, he survives….

I have Masvidal winning by one point through the knockdown, Krause needs the finish. Great jabs now by Krause, huge kick to the gut by “Gamebred”, now he takes the back. Damn, Masvidal is bringing the body work. Masvidal too much for Krause…wins the UD

Thopson moving well, Cote kicking the legs and now a cage grind. Cote getting caught a bit now, and there are some good scrambles now. Quite the cagey opener to this fight….Thomson dancing now with jabs, switches with a nice straight left. Cote just constantly out of his striking range and paying for it…

Thompson winning clearly so far, “The Predator” just falling short. Cote swinging elbows, “Wonderboy” countering beautifully now. HUGE head kick to the face from Thompson, and some crisp boxing. Axe kick now, OH wow! Cote gets dropped and he is out, no he survives but holy crap he looks hurt…

A right hand by Thompson now, and they brawl. The buzzer goes now….UD for Thompson

Howard opens stalking, a bit of a slow fight, with Ebersole picking some jabs and leg kicks. Damn I’m looking forward to seeing Dominick Cruz fight! Ebersole takes the back, stays there but can’t get a sub….

Howard blasting some low kicks now, throwing big hooks, and now he lands a takedown, now he takes the back, locks in the rear naked, more of a crank , Ebersole is out…..close so far. A lot of cage grinding from both guys here, what an awesome fight, said nobody. Ebersole by split D.

Tuck is the underdog in this fight, although both guys are 8-1. Lee is dropping bombs man, with a huge head kick. Some big slams from Lee as well, but he catches Tuck with a thunderous knee to the sack….ouch. Tuck getting beaten to the punch consistently….

Low blow by Tuck now but Lee shakes it off like a boss. Another low blow by Tuck, WTF? Referee takes a point. What a war, these guys are trading heavy! Tuck almost locks up a triangle….

Tuck finding a home for the head kick, huge punch by Lee knocks Tuck’s nose outta joint, Lee is just pounding his face now, this is messy. “The Motown Phenom” takes the decision

Here we go…Gamburyan looks ready, but Gibson is huge for 135. Gamburyan isn’t landing well, and he is getting clipped at range by Gibson. Gamburyan’s debut at 135 pounds is a tough one, as Gibson’s physical gifts shine through. OH!! a huge low kick to Gamburyan’s nuts makes the crowd gasp.

Gamburyan was never really in this fight, getting dropped three times and looking slow, but WOW out of nowhere he submits Cody Gibson with a last second round two guillotine choke. Great comeback, and the third weight class that Gamburyan has won in.