Leading up to UFC 143 many thought that Nick Diaz and Carlos Condit would be a striking battle with two of the most accomplished strikers in the Welterweight division just throwing down and going for it. Things didn’t exactly go that way, instead Carlos Condit used a perfect game plan to counter Nick Diaz’s style and take home the interim UFC Welterweight title after the five round battle.

-Did the UFC just see a lot of pay per view buys disappear?  When the UFC champion openly roots for one fighter to win you have to think that the fans of the sport are also going to want to see that fight.  That was the case leading up to UFC 143’s main event as Georges St. Pierre said he wanted Diaz to win so he could fight him.  With Condit taking home the victory and the interim title, the UFC may have just seen a possible 1 million buy pay per view card fall by the wayside.

-Will fans be turned off by the Condit vs. St. Pierre bout? Condit did what he had to do to win against Nick Diaz, there’s no denying that or faulting him for it, his style gained him the interim title, but will his performance tonight drive fans away from a bout against St. Pierre? While it’s true that Condit has not used this style during his UFC career fans may very well remember it because it’s the freshest fight in their minds and may decide that the match between him and St. Pierre will not be an exciting fight.  Right or wrong when the UFC is asking fans to go into their pockets for a pay per view, the entertainment value will be considered by the consumer.

-Will Nick Diaz stay retired?  Following the fight Nick Diaz told Joe Rogan, “Carlos is a great guy, I’m happy for him and his family. I think I’m done with this MMA, it’s been great out here, I’ve had a good career, you guys pay me way too much, but I don’t think I’m gonna get enough to keep going in this and it’s been a good time.  Good job Carlos, you’re the man bro.” When asked if he was really retiring Diaz replied, “I don’t need this s—t.” Whether that was a frustrated fighter talking or words from the heart, we’ll have to see.

-Did Renan Barao do enough to warrant a title shot? My knee jerk reaction is no he did not, but a glance at the Bantamweight ranks changes my tune, but only if Dominick Cruz defeats Urijah Faber at the conclusion of the upcoming season of “The Ultimate Fighter.” Let’s face it, Cruz has already defeated most of the top contenders and the UFC needs some fresh blood to attempt to unseat him.

-How high is Dustin Poirier’s upside?  Not too long ago Dustin Poirier was a fighter thrown in at the last minute to give a top contender, Josh Grispi, an easy win while he waited for Jose Aldo to heal up. Poirier took that opportunity and made the best of it, dominating Grispi. Poirier has now gone 4-0 in the UFC and he has looked better in each fight. He’s quickly climbing the rankings and may be next in line for a shot at Jose Aldo, but he may also need one more fight against a top level Featherweight before getting that shot. Perhaps match him up against Chad Mendes next and with a win let him have a shot at Aldo.

-Is Stephen Thompson ready for top level competition? Thompson entered UFC 143 riding on a sea of hype and his “Knockout of the Night” performance did little to calm that, but one win does not make “the next big thing.” Thompson looked good against Dan Stittgen, but Stittgen was also making his UFC debut in this fight and is not exactly at the top of the UFC heap. Thompson’s young, let’s give him some time to develop at his own pace before calling him the next anything

Fight of the Night: Roy Nelson vs. Fabricio Werdum.  Werdum made us forget the debacle in Texas against Alistair Overeem and Nelson made us remember that despite his appearance, he’s one of the toughest dude’s in the UFC.

Performance of the Night: Like it or not, Carlos Condit had a perfect game plan and never ventured from that plan. Due to that he left the Mandalay bay Events Center with the interim UFC Welterweight title, while his opponent (allegedly) walked away from MMA.

Finish of the Night:  Ed Herman wins this one by default since his rear naked choke victory over Clifford Starks was the only finish of the main card. If I were to open it up for the entire card, I would say Dustin Poirier deserves this one. 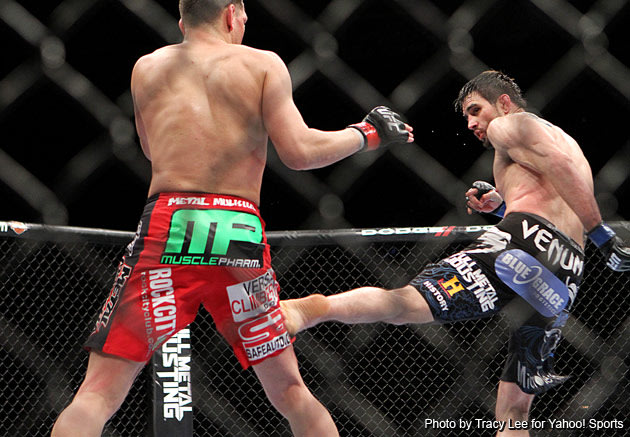