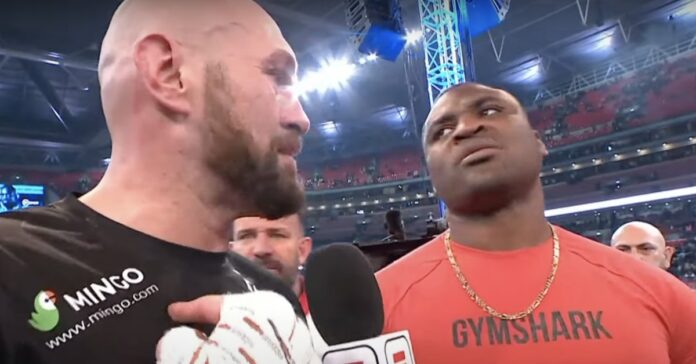 Following the bout, Tyson Fury, who had insisted prior to the event’s headliner that he would be retiring post-fight, was met in the squared circle by UFC heavyweight titleholder, Ngannou – with the pair teasing a future showdown amid months of speculation of a sports crossover bout between the duo.

For Ngannou, the Batie native headlined UFC 270 most recently back in January, defeating interim champion, Ciryl Gane with a five round unanimous decision win over the Frenchman to successfully unify the heavyweight thrones.

In the time since, however, Ngannou – who completed his contractual obligations with January’s judging win over Gane, has welcomed a move to professional boxing, explaining how he had dreamt of entering the squared circle.

Yet to pen terms on a new deal with the organization following the completion of his contractual obligations, Ngannou underwent a surgical procedure to address an ACL tear suffered in the weeks leading to his bout with Gane, and is expected to be sidelined until November at the very earliest. An interim title is also expected to be introduced to the heavyweight division in Ngannou’s absence once more.

Talking up the potential terms and ruleset for a matchup of Francis Ngannou and Tyson Fury, the above mentioned striking coach, Cooper, laid out a brief idea of what sort of hybrid ruleset he would like to see the possible future foray contested under.

“Good ol’ boxing, there ain’t nothing like a 12 round fight, I can tell you that,” Dewey Cooper told The Schmo recently. “Boxing fight, MMA gloves – but instead of four-ounce, eight-ounce MMA gloves in a cage. Don’t have to be in an Octagon, but in a cage. We meet halfway – instead of a ring, we put it in a cage. Eight-ounce MMA gloves on, like the puffy ones guys spar in. And make it a boxing fight, but you can clinch, you can clinch. Straight hands – dirty boxings legal.”

“Basically just the bare knuckle boxing rules, just with eight-ounce MMA gloves in a cage,” Cooper said. “That way, it’s not completely a boxing fight, it’s not completely a mixed martial arts fight, it’s like somewhere — it’s 65-35 (percent) boxer, you know what I mean. ‘Cause, it’s still more boxing, you can’t kick, knee or take them down. And we’ll see if Tyson (Fury) still has that same energy if he’s willing to exchange punches with him – with power puncher like Francis Ngannou with those little gloves on.”