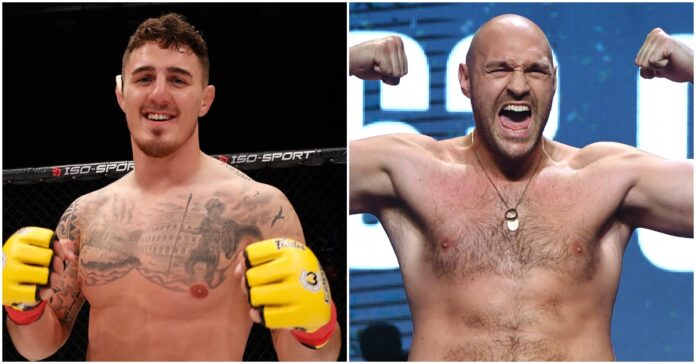 Heavyweight champion Tyson Fury is all in on Tom Aspinall this weekend, as he is cheering for him to beat Alexander Volkov at UFC London.

Fury and Aspinall were former sparring partners and the two trained together for nearly two years. Aspinall was one of the fighters that helped Fury get back on track after his long battle with depression and substance abuse.

Aspinall finds himself fighting amongst some of the UK’s biggest stars that include Paddy Pimblett, Arnold Allen, and many more. The event is set to have some fantastic scraps.

“I just want to wish my buddy Tom Aspinall all the best in his upcoming UFC heavyweight fight. Good luck Tom, do the business. Smash his face in! Get up there, my boy, all the way to the motherf**king bank, man.” (H/T Sportskeeda)

Aspinall is one of the best up and coming fighters in the entire organization. He is currently undefeated in the division and is thought to be the next title challenger. He currently has finishes in all four of his fights inside the UFC.

He has TKO’s over Sergey Spivak, Alan Baudot, and Jake Collier. He also has a submission victory over UFC great and former champion, Andrei Arlovski. He was able to catch Arlovski in a rear naked choke in the second round. His other wins were all first round finishes.

Fury on the other hand, has a fight lined up with Dillian Whyte that will take place on April 23rd. The two British fighters will square off in a highly anticipated fight, that could lead to Fury either fighting Anthony Joshua or Oleksandr Usykfter afterwards.

Do you think Tom Aspinall wins this weekend in London against Alexander Volkov?