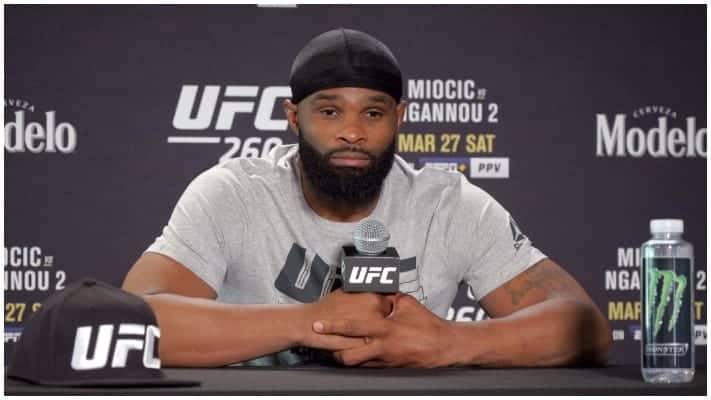 Tyron Woodley has released a statement after his submission loss to Vincente Luque at UFC 260. (H/T MMAFighting.)

Woodley lost his fourth consecutive fight in the co-main event of UFC 260 when Vincente Luque, rocked and then submitted the former UFC Welterweight Champion.

Woodley had made a much more positive start than his three previous losses, he was aggressive and on the front foot from the first buzzer. The American tagged Luque with a hook early on which appeared to have the Brazilian hurt, however Woodley then left himself open whilst attempting to find the finish, which led to Woodley being rocked and then subsequently finished.

The fight between Luque and Woodley did earn the fight of the night bonus meaning Woodley took home an additional $50,000 for the performance.

Tyron Woodley posted a statement to Instagram after the fight.

‘Sh*t was going really well until it wasn’t. My camp pushed me in ways I haven’t been pushed in a while.’

‘I Committed, and swore to myself I would bring the tiger out that earned me gold. I saw the opportunity for the KO and got too excited. Payed a big cost.’

Woodley then went on to say he didn’t regret his aggression in the fight and paid tribute to 29-year-old Vincente Luque.

‘I don’t regret my aggression as that’s what God created me to do. Vincente Luque is a tough and humble fighter. Was an honour to share the cage with you tonight.’

It was a much more positive performance while it lasted for Woodley however there are now doubts over whether he will fight again in the UFC with Dana White indicating he won’t.

Responding to being asked if Woodley would fight again White said: “How old is Tyron now? 39 and he’s 0-4 (in his last four fights.)”

Would you like to see Tyron Woodley call time on his MMA career?