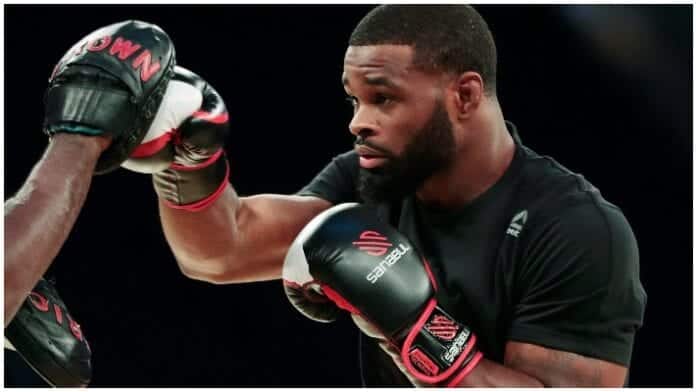 Tyron Woodley is planning to pursue more fights in boxing after he makes his debut against Jake Paul on Showtime pay-per-view this summer.

‘The Chosen One’ was cut from the UFC after losing four consecutive bouts inside the Octagon. Woodley has landed on his feet by securing a mega-money fight with YouTube star, turned professional boxer.

Woodley told TMZ Sports he is planning to box again after knocking out the 24-year-old on August 28.

“I think I’ll box some more,” Woodley said. “I want to fight twice this year. I fight him [Jake Paul] on August 28 and I think around November, I’ll be ready to box again. I don’t know exactly who, when, where, what, how but I know me going out here and doing work is really gonna put me in a position to open other windows.

The former UFC welterweight champion is happy to making the biggest payday of his career and plans to increase his market value by KO’ing his internet celebrity opponent.

“The best thing that’s happened in the last 24 hours is I’m smiling that my market value is where it’s at. You won’t put me in the clearance rack. August 28, you’re gonna see it’s not past and people are gonna want to see more of it.”

Woodley says his hard work in the gym will make this upcoming fight against Paul the easiest of his career.

When I say this is gonna be the easiest fight and the biggest payday of my career, that’s the truth, but that’s not because he’s an easy fight. It’s because I’m gonna train my ass off and I’m gonna make it an easy fight.”

Do you want to see Tyron Woodley pursue a career in boxing if he knocks out Jake Paul in his debut on August 28?