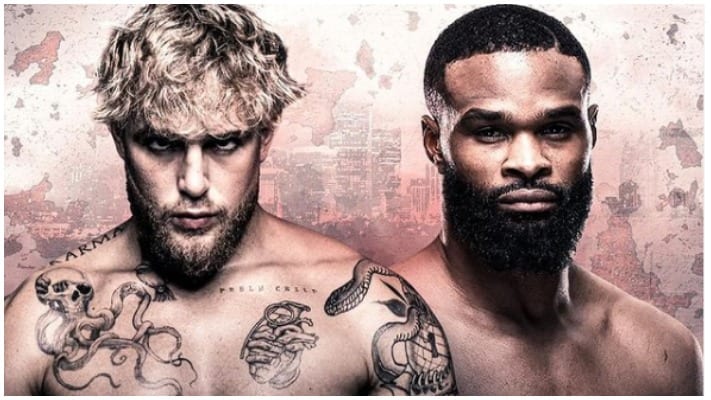 Jake Paul has confirmed his next opponent will be Tyron Woodley.

On Monday, MMA Island reported that the former UFC welterweight champion was set to face Paul on Showtime pay-per-view on a date yet to be disclosed.

The YouTuber has now taken to social media to confirm that report to be true and revealed August 28 is the date he and ‘The Chosen One’ are set to square off.

“It’s official✍🏼I have a list of people I plan on knocking out and as I enter my fourth pro fight, I am excited to cross the first one off the list by challenging myself against @twooodley a 5 time UFC Champion known for his knockout power,” Paul wrote. “Tyron ran his mouth a little too much in the locker room when I knocked out his best friend Ben and earned himself a top spot on the Problem Child death list. Tyron’s a seasoned striker who has fought the best MMA fighters in the world but will be dropped by a Disney teen star in 2 rounds. Maybe this time Dana White will actually be a man of his word and put his money on his former champion instead of trying to undermine my success like a jealous ex. Influencer vs MMA….let’s get it on. It’s Showtime. @showtimeboxing @mostvaluablepromotions”

Paul is currently 3-0 as a professional boxer after picking up knockout wins against internet celebrity AnESONGib and former NBA player Nate Robinson as well as former MMA champion Ben Askren who is a good friend of Woodley’s.

Woodley was cut from the UFC after losing to Vicente Luque at UFC 260 in March. The defeat stretched Woodley’s winless run to four. ‘T-Wood’ previously lost against Kamaru Usman, Gilbert Burns, and Colby Covington in consecutive fights. He’ll be making his boxing debut when he squares off against Jake Paul on August 28.

Who do you think will win on August 28? Jake Paul or Tyron Woodley?