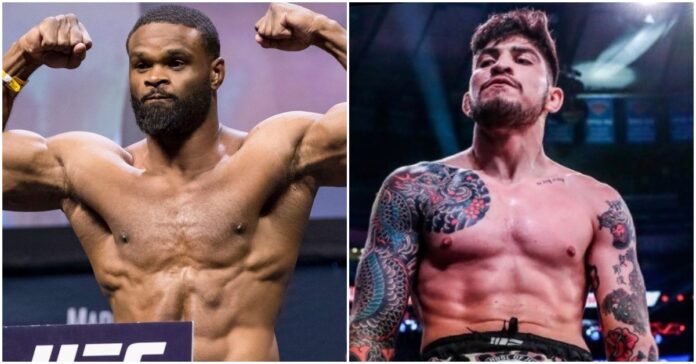 Danis, who has made his name trolling everyone in the MMA world from Michael Bisping to Khabib Nurmagomedov. The former IBJJF world champion has made many outlandish claims such as being the best grappler in MMA but the claim that Woodley was not allowed to knock out Paul due to a clause in the contract picked up some steam online.

Woodley recently joined Ariel Helwani on the latest episode of ‘The MMA Hour’ to discuss his impending rematch with Paul when the no knockout clause was brought up. Woodley had this to say “why has he become a valid source to anybody, like I’m surprised you have him on the show as much as you do.

“If people wanna talk about stuff, I’m gonna let them talk about it. That’s how the sport works; whether it’s good or bad. Like, I’m not on Jake’s PR team, shit, it ain’t my job to give him credibility and like make people believe that he’s the real deal. That’s his people and people who think there was some knockout clause, based upon Danis who, how would he have access to my contract?”

Helwani would press for a definitive yes or no, “No.” Woodley stated “but it’s a clause [in the rematch] that says if I knock him out, they give me some extra cheese on my macaroni. And you know what, I wanna thank Dillon actually, because he made that dumbass remark. Now, son, I get more money.”

Paul was originally scheduled to face Brit, Tommy Fury on December 18th but after Fury withdrew, Woodley would step in on late notice. Maybe due to all the controversy surrounding the bout and the ‘no knockout clause’, Woodley had supposedly been awarded with a knockout bonus. Paul would announce via his Instagram that “he {Woodley} is getting an extra $500,000 if he knocks me out.” Something that Woodley would later confirm in the interview.

What do you think? How will the rematch between Tyron Woodley and Jake Paul go?