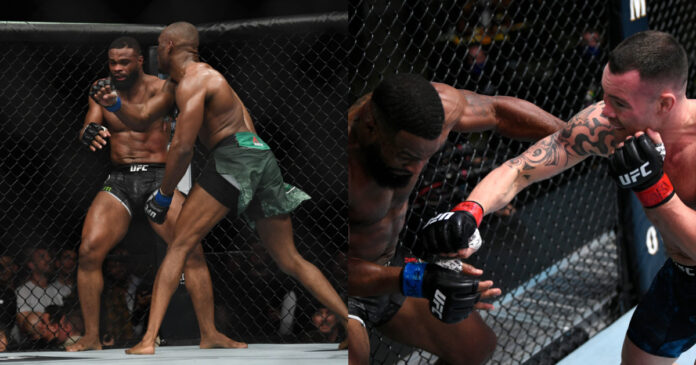 Woodley’s fall from grace has been well documented and at times a little hard to watch. ‘The Chosen One’ lasted tasted victory back in September 2019 when he would make his final successful defense of his 170lb title against Darren Till.

The 40-year-old would never really look the same after this performance, a little gun-shy, clearly lacking confidence, Woodley’s flat performances would leave him on a 6-fight losing streak, including two losses in professional boxing to Jake Paul.

Tyron Woodley blames being a mentor for performances

While Woodley had previously blamed his losses for his distractions outside of the cage, like pursuing a rap career and media work he had been doing, the former 170lb ruler gave a new explanation.

Speaking to MMAJunkie, Woodley said that because he had mentored Covington and Usman in the past when it was time to face them, he wasn’t motivated.

“I wasn’t training any less, I wasn’t any less focused. Maybe not as motivated, just because the bullsh*t, it didn’t even make my temperature rise. Most guys I was fighting, like Usman and Colby, I mentored those guys. I’ve got the text messages to prove it. ‘How should I do this, and who should I fight, and how does it feel to be a champion?”

“These guys was like my pupils at one point in time. So the threat of fighting never really made my stomach bubble. I was going through the motions for a minute,” Woodley said. (H/T MMANews).

It’s likely Woodley will find himself in some kind of boxing match next, professional or exhibition. He has found himself in the influencer boxing scene which in fairness could land him another big payday.

What would you like to see Tyron Woodley do next?