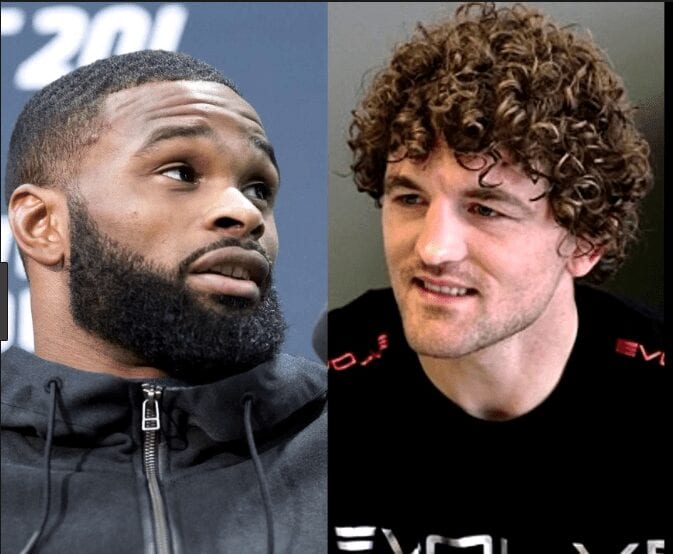 The mixed martial arts (MMA) world is still reacting to the news that Georges St-Pierre has retired from the sport.

Perhaps two of the best match-ups St-Pierre missed out on were against Tyron Woodley and Ben Askren. Woodley currently reigns as the 170-pound champion of the UFC. As for Askren, he has long been recognized as one of the sport’s most dominant welterweights. He’ll make his UFC debut at this weekend’s (Sat. March 2, 2019) UFC 235 in Las Vegas.

Woodley, Askren’s longtime friend and training partner, will be defending his title on the same card against Kamaru Usman. Both fighters spoke up during a media luncheon to promote this weekend’s pay-per-view (PPV). During the event, both reacted to “GSP’s” retirement.

Woodley admitted that he would’ve liked to fight St-Pierre for his own legacy, but St-Pierre’s is already established and doesn’t require him to test himself against the current welterweight king (via MMA Junkie):

“I think Georges has done what he needed to do in the sport,” Woodley said. “He didn’t have to prove it. Of course, I want him to fight me. But that’s for me. That’s for my legacy. He didn’t need to fight Tyron Woodley.”

As for Askren, he thinks St-Pierre left the door open for a possible return if the right opportunity ever presented itself:

“I don’t feel like he set a hard line in the sand,” Askren said. “I felt like he set the door open if something interests him in the future.”

Of course, the right fight could also lure St-Pierre back out of retirement. Right now, that looks like it would only be his oft-discussed superfight with Khabib Nurmagomedov. He isn’t getting that for now, but you can never say never in the UFC.

Indeed, his trainer Firas Zahabi acknowledged that could be the case in a recent interview as well. So while “GSP” is gone for now, Askren and others know it may not be for good.