LowKickMMA.com
Home Combat Types Of Wrestling Styles Across The World 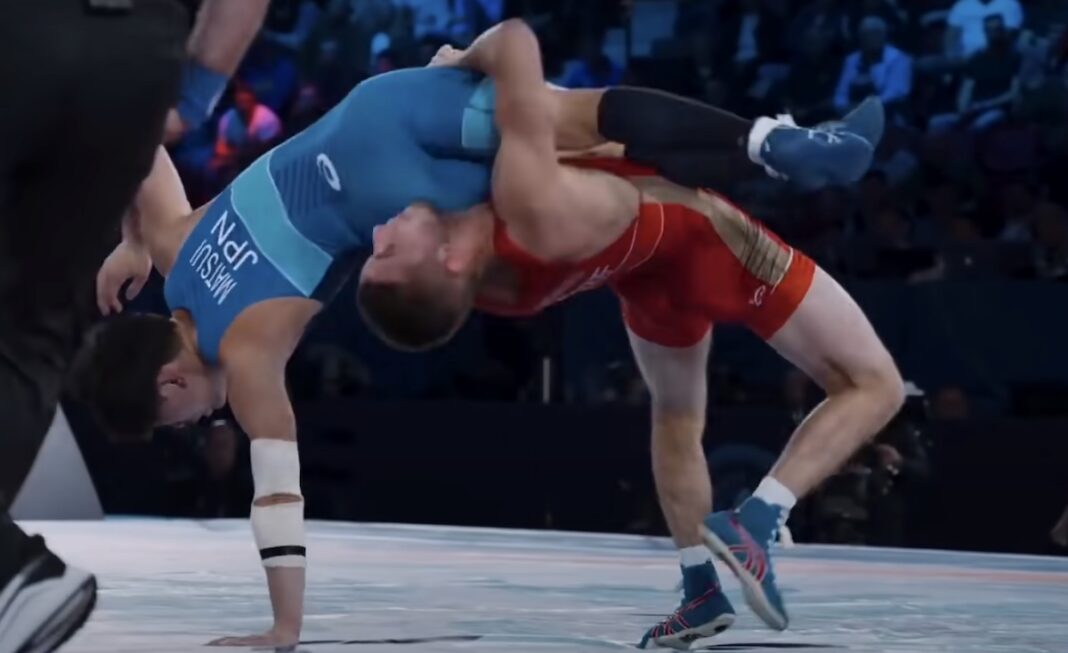 When you watch an MMA fight or a BJJ match, you’ll often hear that a competitor has a background in wrestling. That is sort of a blanket statement, but there are actually numerous styles of wrestling often related to different geographical regions.

It’s a tall order to try to list all of the styles of wrestling in the world, but we’ll take a shot at it. Here is a list of wrestling styles from around the world.

We’ll try to list styles of wrestling from every continent and give you descriptions of each one.

When people talk about wrestling in general, they are most likely referring to freestyle wrestling. It is one of the most practiced wrestling styles in the world.

Freestyle wrestling was developed off of catch as catch can wrestling. Making its debut in the 1904 Olympics with similar rules to catch wrestling, but submissions were excluded from the competition.

In a freestyle match, takedowns attacking the legs and upper body are allowed. An extra dimension from Greco Roman wrestling, where takedowns are only allowed from the waist up.

Later on after the 1904 Olympics, universities in the US began creating wrestling teams and later in grade schools. Wrestling quickly became one of the popular sports, not only in the US but the world.

There are now numerous countries around the world with elite freestyle wrestlers.

The second most popular wrestling style in the world is Greco-Roman wrestling. It was developed about 500 years ago and took elements of ancient styles of folk wrestling.

Greco-Roman’s alleged creator, according to United World Wrestling, is a French soldier named Jean Exbrayat. Jean would perform his style of wrestling at French fairs and would call it “flat hand wrestling.”

In this style of wrestling, Exbrayat created rules that takedowns were only allowed from the waist up. Italian wrestler Basilio Bartoletti was later coin the term Greco-Roman wrestling and that’s the name that stuck.

Greco-Roman at one point was the most popular wrestling style in the world before freestyle wrestling was developed.

This style has been one of the most practiced wrestling styles for hundreds of years. Along with freestyle wrestling, Greco-Roman is the other form of wrestling that is an official Olympic event.

It is very similar to freestyle wrestling, but has few differences, which includes point systems and competition rules.

In folk style wrestling, there are more points given escapes from the bottom position. You can also lock your hands when attempting takedowns or pins, but not in riding positions.

One of the best folk wrestlers in MMA was former One Championship champion Ben Askren.

Catch wrestling or Catch-as-catch-can wrestling was created in 1870 by British wrestler J.G. Chambers. A Welsh sportsman, who was responsible for instituting championships for several sports in the UK.

The origins of catch wrestling came from English wrestlers, who performed at fairs throughout the region. They would also develop their own submission holds that they would call “hooks.”

Catch-as-catch-can was actually the original style of wrestling introduced into the Olympics in 1904. But the rules were altered to no submissions allowed, which created freestyle wrestling. This style of wrestling would also influence the creation of Sambo and Luta Livre.

Since that time, this style of wrestling has been ingrained into the culture of the Mongolian people. Traditional Mongolian wrestling events are grand displays attended by thousands of spectators.

The wrestlers wear traditional Bokh wrestling attire that consists of colorful half shirts, speedos, and black boots. Matches are held in a dirt circle, where the competitors start from standing.

It’s like a mixture of Greco-Roman, Sumo, and Judo. If any part of your body other than your foot touches the ground, you lose the match.

In Siberia, they have a very similar style to bokh called Khuresh or Tuvan wrestling. Similar attire is worn, but the rules are slightly different that in Mongolian wrestling

Kurash is a form of wrestling practiced within central Asia and Russia. It was developed off of Judo and wrestling like Sambo, but has a different rule structure.

Instead of wearing a Gi top in Sambo, a towel is worn around competitors’ waists in Kurash. Matches are held in wrestling mats in the middle of a field.

Kurash wrestlers start the matches by grabbing hold of each other’s towels and fight for positioning. Using the towel grip to make angles and get leverage to land throws or takedowns.

Collar & elbow wrestling is a type of Irish jacket wrestling that dates back to the 2nd millennium BC. Early Irish people have been performing styles of wrestling like collar & elbow for ages.

It’s also referred to by the names “coiléar agus uille”(Gaelic for collar & elbow), brollaidheacht, and brollaidheacht. (The front of the shirt jacket and collaring.)

Competitors wear a light jacket, shorts, and boots. They grab hold of each other’s jackets and fight for positions to land takedowns.

Collar & elbow is still practiced in Ireland and one of the big events at the annual Tailteann Games.

There are also derivatives of collar & elbow performed in regions of the UK with the biggest being Cornish wrestling. The goal in Cornish wrestling is also to throw your opponent and make them land flat on their back.

Sambo is a mixture of wrestling and Judo created by Vasili Oschepkov and Viktot Spiridonov. Oschepekov was one of the first foreigners to learn Judo directly from Jigoro Kano.

The two actually never cross trained, but their students did and the Soviet military began developing a unique fighting style. What they came up with would be known as Sambo.

A mixture of Judo, wrestling, and different martial arts is practiced around Russia. It became the official combat sport of the USSR in 1938.

Sambo is practiced with a Gi top and shorts, where the goal is to take your opponent down and submit them. Combat Sambo was an offshoot of Sambo that included strikes like in MMA.

Today, Sambo is still the official sport of Russia and one the country’s most popular sports.

In the west African country of Senegal, they practice a style of folk wrestling called Senegalese wrestling. You may have seen this wrestling style if you watched the Netflix documentary series Fightworld.

A Senegal wrestling match takes place in a dirt circle and is similar to folkstyle wrestling with a few differences. One of the big differences is that slaps are allowed in Senegalese wrestling to set up takedowns.

The goal in this form of wrestling is to land an overhead takedown or throw an opponent out of the area.

Schwingen is a Swiss style of wrestling that dates back to the 17th century. It’s another type of folk style wrestling within Switzerland with variations to the rules and format.

Originally, Schwingen was a friendly competition between farmers and herders from the Swiss alpines. They would get together at festivals to see who had the best wrestlers between the two groups.

Schwingen matches are held in a dirt circle, where both competitors start with grips on the Schwingerhosens. Whoever can throw the other competitor to the ground wins the match.

Shuai Jiao is another form of jacket wrestling that was created within China. Basically an ancient form of Judo that dates back several thousand years before the creation of Judo.

It is considered the original form of wrestling that was developed within China. Modern Shuai Jiao is like a mixture of a wrestling and Judo match.

The competitors wear light Gi jackets, pants, and wrestling shows. In Shuai Jiao, both tosses and takedowns are legal and scored as points.

Within China, Shuai Jiao is still practiced and used by Chinese military and police.

Backhold wrestling is basically the ride position with freestyle, Greco-Roman, and folkstyle wrestling.

One competitor grabs hold of the other’s back in the ride position. They must try to throw their opponent, while the other tries to break free of their hold.

Most Scottish backhold wrestling matches consist of a best of 5 series between the competitors.

Ssireum is a Korean folk style of wrestling and is the national sport of South Korea. This form of wrestling first started back in the 4th century within Korea.

In modern Ssireum wrestling, competitors wear wrestling shorts, and a belt called satba. A satba is similar to the attire worn in sumo, but goes around the opponent’s waist and thigh.

Matches are held in a dirt circle, where both wrestlers start on their knees, and lock of hold of their satbas.

To win a match, a competitor must make part of their opponent’s body hit the ground from the knees up.

Sumo is a Japanese wrestling style that has been part of Japan’s culture for over a thousand years. The legend says that Japanese demigods decided ownership of the Japanese islands in a sumo match.

It actually originates from a ritual dance ancient Japanese farmers would do to ask for rain from the gods.

A sumo match is held in a dirt ring called a “donyo” and the wrestlers are referred to as “rikishis.” The rikishi’s uniform consists of a loincloth called a mawashi.

Mawashis made of silk are designated for high ranking rikishis and black cotton for lower pro rikishis.

Before a match starts, the wrestlers dance around the ring and throw salt on the ground to bless the donyo.

In sumo, you are allowed to palm strike an opponent to knock them off balance and set up takedowns.

Many people joke about this type of wrestling within combat sports communities, but it’s a legitimate sport in Turkey.

Turkish oil wrestling is where Turkish wrestlers wrestle each other in a field shirtless. Before the matches they douse themselves in oil to make it harder for their opponents to take them down.

Their logic behind this is only the strongest wrestlers will be able to land takedowns despite being covered in oil.