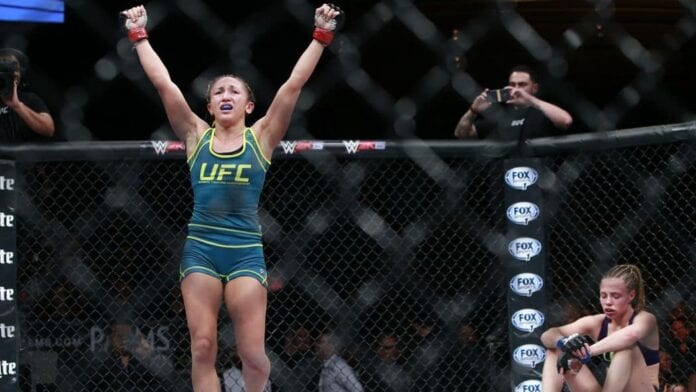 The Ultimate Fighter 20 finale went down in Las Vegas, Nevada, last night (Friday December 12th, 2014) and was filled with some rather exciting bouts, mainly in the women’s strawweight division. The entire preliminary card was filled with the 115-pound newcomers to the UFC, and the headlining bout featured TUF 20 finalists Carla Esparza and Rose Namajunas.

The two fought for the inaugural women’s strawweight crown in front of the crowd in the Palms Casino Resort, and it was Esparza who pulled out the submission win for the title. “Thug” looked out of sorts, and tired by the inevitable end, and there are many points for debate from this historic title fight. Firstly….

As we saw with “The next Anderson Silva” Uriah Hall, hype is not necessarily a good thing for a young Ultimate Fighter hopeful. Much like “U-Hall”, Rose Namajunas choked in her TUF 20 finale title fight with Carla Esparza, and was thoroughly dominated throughout the fight. There was the added pressure of fighting for the inaugural strawweight title to make the situation all the more meaningful too.

Was Dana White referring to Rose Namajunas as the “Next Ronda Rousey“””? Obviously yes, unless you believe he had Esparza pegged as the season winner. The hype behind “Thug” was a gamble that didn’t pay off, and likely added extra nerves backstage for the young Grudge Training Center product. Which leads me nicely to my next point….

The future is bright for the runner up

Although Namajunas was outclassed in her attempt at the women’s strawweight strap, there is a bright future ahead for her. She has a marketable back story and personality, an exciting style, and is still very young in the game. Last night was only her fourth professional fight, and she faced in Esparza a woman with three times as much pro experience.

The new champion’s wrestling pedigree and status as a former Invicta champion makes hindsight so much clearer now, and this loss might have been just what was needed to kick start Namajunas’ step up in to the big leagues. At just 22 years of age, there are plenty of big things on the horizon for “Thug”. Last, but certainly not least….

The new women’s strawweight champion got through the latest season on The Ultimate Fighter without really receiving any hype. She only got one finish throughout her stint on TUF, and was taking a back seat in the hype train leading up to her finale fight with Rose Namajunas. In a way, the lack of added pressure due to expectations may have assisted the Team Oyama product in her dominant victory.

After some great performances by her fellow female 115-pounders, there should be no shortage of potential contenders in line for Esparza. Keep an eye on UFC on FOX 13 tonight (December 13th, 2014) as Claudia Gadelha and Joanna Jędrzejczyk battle for the consensus number one contender spot. Once again, props to Esparza for the win.

Recognition also goes to KJ Noons for his imitation of a trademark Space Jam finishing move, Yancy Medeiros for his super slick submission win, Emily Kagan for having an epic chin and to Felice Herrig for being the hottest/best grappler on the card.