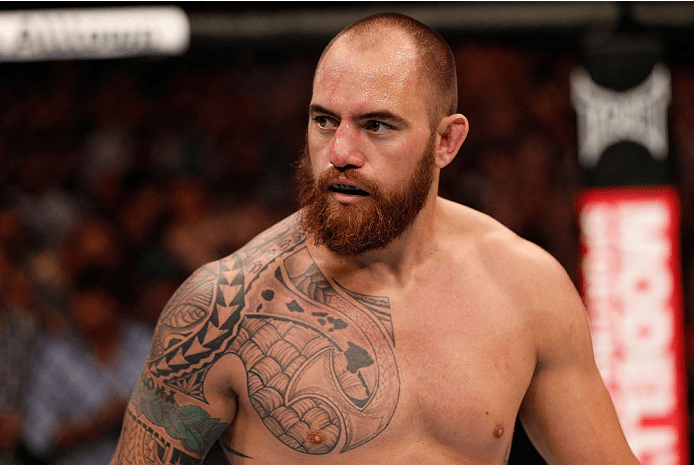 Heavyweight Travis Browne may not have any official domestic violence charges coming his way, but the fighter is still out of action pending the results of an official investigation from his employers.

In July, Browne’s ex-girlfriend Jenna Renee Webb posted a series of disturbing photos on Instagram where she appeared to have some concerning bruises that were the result of beatings at the hands of the 6’7” Browne.

The UFC quickly fired back that they would not tolerate domestic violence in an official statement, and it was soon found that Webb would not be pressing charges on ‘Hapa’ in order to let him continue raising his children without issue. Browne of course claimed he was innocent of the allegations in a statement released by his manager.

That doesn’t mean that he’s out of the woods just yet, however, as Ariel Helwani reported that Browne is on the bench while the UFC conducts their own investigation into the touchy allegations:

“They said that the is currently sidelined pending the results of an internal investigation, so we’ll see what happens there.”

Domestic violence has become a hot topic in MMA and sports as a whole as of late, with HBO airing a loaded piece on the subject that featured two of fighting’s worst examples in Jason ‘Mayhem’ Miller and Jon ‘War Machine’ Koppenhaver, who have both been previously arrested for the crime.

They certainly weren’t the best examples in MMA, and they don’t even fight anywhere close to the UFC anymore, yet it aired, and that means it’s in the public eye. The UFC must and definitely should take a hardline stance to speak out against domestic violence, because there’s simply no quarter given for men (and women) who beat each other senseless for a living.

The promotion has dealt with similar instances in the situations of Anthony Johnson, who was acquitted of his charges, and Michael Johnson, who was quietly suspended following a domestic violence arrest. They’ve done the right thing in investigating Browne’s accusations further, even if he’ll never appear before a jury for them.

Will he be seen fighting in the Octagon relatively soon Should he?