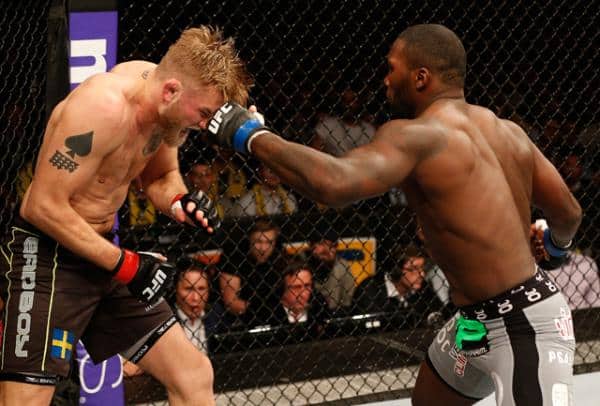 This Saturday night (May 23, 2015) surging light heavyweight Anthony Johnson will battle Daniel Cormier for the light heavyweight championship that was left vacant when the UFC stripped controversial former champion Jon Jones of as a result of his alleged involvement in an Albuquerque, New Mexico, felony hit-and-run accident that left a 25-year-old pregnant civilian with a broken arm.

The bout will serve as the culmination of Johnson’s incredible resurgence, one that has seen ‘Rumble’ win nine straight fights after being unceremoniously released from the UFC after missing weight for the third time prior to his UFC 142 loss to Vitor Belfort. ‘Rumble’ has always been known for his jaw-dropping knockout power, and he’s put the nonsense of cutting down to 170 pounds behind him in order to settle in at his current home of 205 pounds.

That adds up to quite possibly the most frightening fighter in all of mixed martial arts (MMA) right now, so it’s time to take a look back at ‘Rumble’ top five knockouts throughout his storied career. Check out Johnson’s greatest hits and cast your vote for your favorite in the poll below!

1.) Alexander Gustafsson – First Round TKO at UFC on FOX 14:

This shocking finish earns the top spot on this list due to the sheer magnitude of it and the fact that it was the win that earned Johnson his title shot this weekend. ‘Rumble’ came into the incredibly hostile territory of ‘The Mauler’s’ native Stockholm, Sweden without batting an eyelash, capitalizing on a lazy first round front kick to hit the lanky Swede with a huge right hand.

A violent onslaught ensued from there, with Johnson wobbling Gustafsson before dropping him to the mat to finish off the fight with a relentless flurry of uppercuts that had ‘The Mauler’ seeing stars.

Continuing his prominent rise competing in a much more natural weight class, ‘Rumble’ built on his impressive decision win over Phil Davis at UFC 172 by adding longtime vet Antonio Rogerio Nogueira to his illustrious victims at UFC on FOX 12 last July.

It wasn’t much of a fight, either, as Johnson dropped the Pride standout with some earth-shattering uppercuts that had the bout signed, sealed, and delivered in only 44 brutal seconds.

After beating former UFC heavyweight champion Andrei Arlovski in his prior World Series of Fighting (WSOF) bout, Johnson returned at WSOF 8 to absolutely floor another UFC-tested vet in Mike Kyle. Although the longtime competitor may have been out of his prime, Johnson made sure there was n doubt whatsoever about his chances at 205 pounds, blasting the AKA member with his monstrous left hook that has become one of his many trademark strikes.

4.) Charlie Brenneman – First Round KO at UFC on Versus 6:

In his last bout at welterweight, ‘Rumble’ took on an opponent who brought in a ton of momentum thanks to his upset win over Rick Story in Brenneman. There would be no Cinderella Story for ‘The Spaniard’ this time, as Johnson stepped back into the Octagon after 16 months off from knee surgery to land one more highlight reel KO to his seemingly endless string of jaw-dropping knockouts, stopping Brenneman’s respected wrestling to finish the bout with a first-round head kick.

This one was especially sweet for ‘Rumble’ because he got revenge on tough welterweight Burns after ‘The Fire’ won a controversial first bout earlier that year with a series of vicious eye pokes. A back-and-forth first round that saw Johnson get a takedown, Burns for a triangle, and finally ‘Rumble’ momentarily drop Burns with a straight punch, and the second saw some sharp kicks and a takedown from ‘Rumble,’ but the third round is where the real action happened. ‘Rumble’ floored Burns with a perfect head kick 28 seconds in, proving there was no doubt about his bouts with Burns and adding another highlight reel knockout to his growing list.

‘Rumble’s’ UFC debut went exceedingly well when he filled in on short notice to fight Chad Reiner. The brutalizing 23-year-old announced his presence with a massive left hook that wobbled Reiner early, stiffening him with two more for good measure that had his opponent out in a mere 13 seconds.