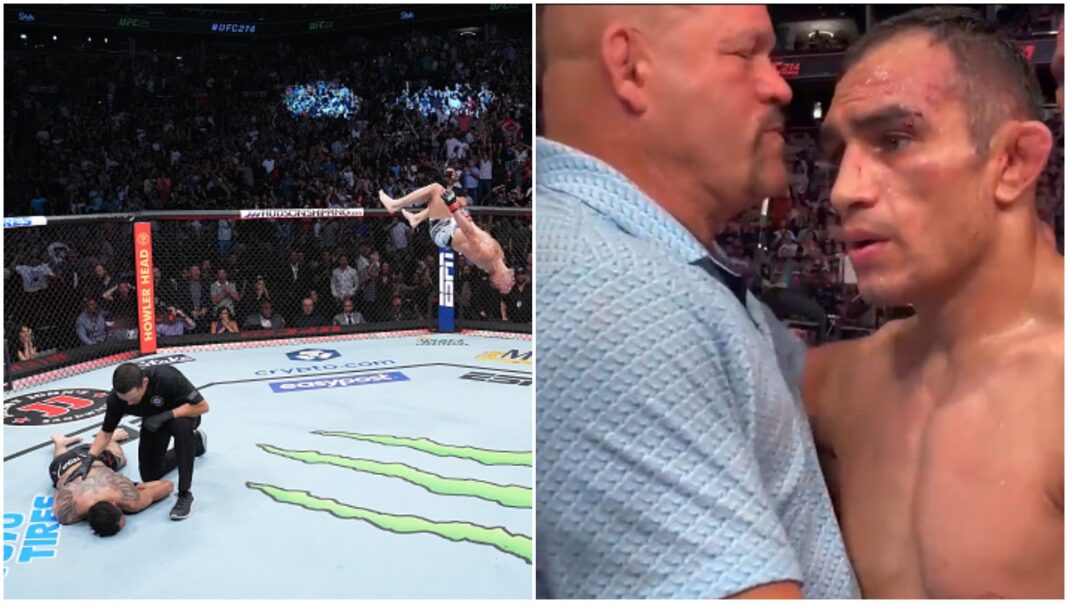 After one of the most viral knockouts in sports history occurred at UFC 274, fight fans were met with a humbling scene. After recovering from unconsciousness, Tony Ferguson exited the cage and was embraced by the legend Chuck Liddell: a man who has been on the wrong side of many gruesome knockouts himself.

The battle between Ferguson and Michael Chandler was extremely competitive in the first round, so much so that the intensity was rising, and tension was at an all-time maximum worldwide. Ferguson’s combos were straight and true, and he had massive success utilizing his reach earlier on the shorter man that is ‘Iron Mike’.

Chandler hung tough, however, displaying his chin. He ate ‘El Cucuy‘s’ best shots and was serving meteors of his own, swinging for the fences in the truest form of the phrase. Things hit the ground, and Chandler finished up with some beautiful ground-and-pound. However, ‘El Cucuy’ threatened submissions from the bottom and landed some clinical elbows. It was a very even round with Ferguson getting the better on the feet and Chandler arguably doing the better work on the ground.

Things would change, however, early into the next round. ‘Iron Mike’ would secure the greatest knockout in his entire career and cement his highlight reel as potentially one of the greatest in MMA. And Ferguson? Well, the entire MMA community was devastated for him.

A beloved figure in MMA, you would be hard-pressed to single out another fighter that fans love any more than Tony Ferguson. The authenticity, the throwing of imaginary sand during fights, the cryptic tweets – the man is just one of a kind.

So, you could understand that while everybody was happy for Chandler and impressed (to say the least) by the knockout, the general feeling was that of sadness. However, to ease the hearts of MMA fans, an icon was there to give Ferguson a simple embrace, and say some words that have not yet been disclosed publically.

How the Wheel Turns: Chuck Liddell Embracing Tony Ferguson Is Both Ironic and Iconic

Fans of old-school MMA will be well aware of Chuck Liddell. ‘The Iceman’ was a brutal fighter, who devastated his opponents with rapid-fire strikes that erased consciousness and etched his very name into the stones of greatness.

Until the day things changed. No longer was Chuck Liddell the impervious monster of fiction and lore. He was human. And he was being knocked out by almost everybody. So, the infamy died down, and people realized he was no god, but a mortal man with consciousness like the rest of humanity.

In a bizarre twist of fate, Tony Ferguson appears to have followed a near-identical path. He was unstoppable, the ‘boogeyman of the division.’ Until now. It started with the epic loss to Justin Gaethje during the covid pandemic, and it resumes with this dramatically shocking knockout he sustained in the Chandler fight at UFC 274. Tony Ferguson is mortal, and he is human. ‘El Cucuy’ is a boogeyman no longer.

That’s why it’s fitting that none other than Chuck Liddell was there to embrace Tony Ferguson after such a terrible defeat. MMA fans will never lose their love for either fighter, but it has become a sad reality that neither man will reach the heights they once stood at.

What are your thoughts regarding this heart-warming embrace between two legends in Liddell and Ferguson?