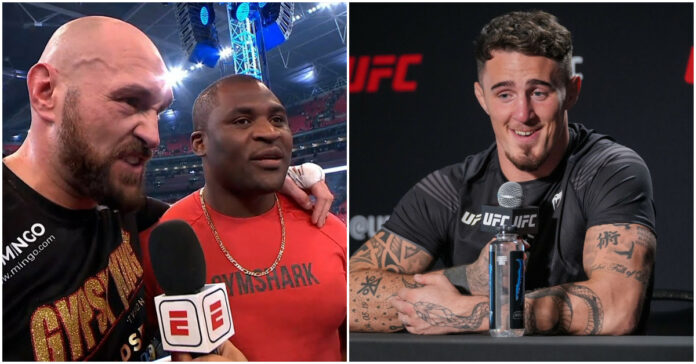 Taking a page from ONE Championship‘s playbook, Fury’s former teammate Tom Aspinall suggested a hybrid ruleset for the crossover fight. Aspinall proposed the idea of having rules change between rounds much like the recent MMA/Muay Thai showdown between Rodtang and Demetrious Johnson at ONE X.

Following Fury’s latest win over Dillian Whyte, Francis Ngannou walked into the ring as the pair promoted the idea of the possible megafight. One major sticking point in regard to their matchup has been the ruleset that would be utilized for such a unique showing.

To his credit, Fury has expressed his willingness to wear MMA gloves which are considerably smaller in size than the traditional boxing mitts but hasn’t spoken about much of a change in the standard boxing rules.

According to rising contender Aspinall, a match like the Rodtang-Johnson one, where the rules changed from MMA to Muay-Thai between rounds, would make more sense for Fury’s clash with Ngannou. Having just one sport dictate the rules can heavily skew the odds against the other sportsman.

In an interview with Sky Sports, Tom Aspinall recommended ways how to make the crossover fight work. Aspinall suggested the addition of a new technique from MMA as the rounds progressed.

“Little gloves, for sure, and five-minute rounds, that would definitely make it a little bit even. I think they should do first round boxing only. Second round, maybe, boxing and low kicks.

“And third round, I don’t know, boxing, low kicks, and clinching. I think something like that would make it a bit more even.”

Aspinall talked about how Fury has trained grappling in the past with other MMA stars like Darren Till at the gym.

“I’ve grappled with him [Fury] before,” Aspinall explained. “He’s interested in it. So, I know he’s done bits of grappling, bits of kicks, and all that. He was down in our gym training with Darren Till before, doing kicks on the pads and all that stuff. So, he’s definitely got interest in it. I don’t know. I’d love to see it, though.” (h/t Mirror)

Ngannou has been in a deadlock with the UFC regarding the terms of his next contract. If the heavyweight king chooses not to resign with the promotion, ‘The Predator’ could become a free agent next year to make the fight with Fury happen.