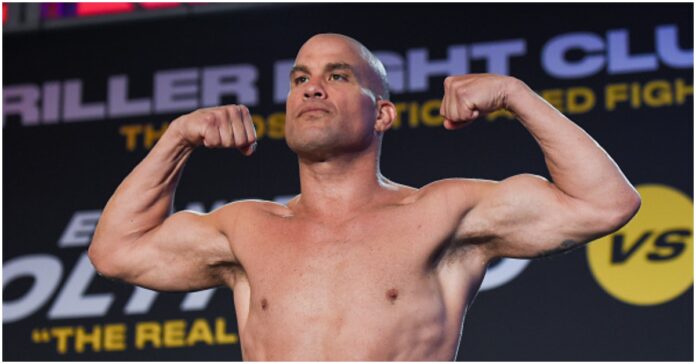 Tito Ortiz is ready to call it a career in combat sports and intends on retiring under the bright lights of the UFC.

Ortiz, 47, has stayed fairly active in combat sports since his exit from the UFC 10 years ago. Under the Bellator banner, Ortiz won three out of four bouts before moving onto a short political career that was marred in controversy.

Now the ‘Huntington Beach Bad Boy’ is ready for one more fight and wants to do it in the Octagon with fellow former UFC light heavyweight champion Mauricio ‘Shogun’ Rua.

“It’s never over and I think I made that mistake with the UFC when I said I’ll never fight for the UFC ever again,” Ortiz said while speaking to Helen Yee Sports. “And now that I think about it, that’ll be an amazing last fight for myself and for Shogun Rua.

“Shogun has his last fight with the UFC, we’re in kind of the same era, so it would be nice to see a Tito Ortiz vs. Shogun. I would like that.”

Tito Ortiz Believes ‘Shogun’ is The Perfect Opponent For His Retirement

Despite both being signed by the promotion from 2007 to 2012, Ortiz and Rua never crossed paths. Now with ‘Shogun’ on the final fight of his UFC contract and facing retirement himself, Ortiz believes it’s the perfect opportunity to book a contest between the two icons.

“I have a lot of respect for Shogun, I think he’s an amazing former champion, an amazing fighter,” said Ortiz. “I watched his last fight. I thought he won the fight, but they ended up giving it to OSP. Let’s see what happens in the future.”

‘Shogun’ has dropped his last two contests. Most recently he was on the losing end of a close split decision to Ovince St. Preux at UFC 274.

On the flip side, Ortiz has won his last three mixed martial arts bouts. In 2018, Ortiz defeated his UFC rival Chuck Liddell in a trilogy bout under the Oscar De La Hoya’s Golden Boy Promotions label. Ortiz followed that up with a first-round submission over Alberto Rodriguez, better known to WWE fans as Alberto Del Rio.

Do you want to see Tito Ortiz return to the UFC for a retirement bout against ‘Shogun’ Rua?