LowKickMMA.com
Home Boxing News Tito Ortiz ‘Guarantees’ Another Fight Before The End Of 2022 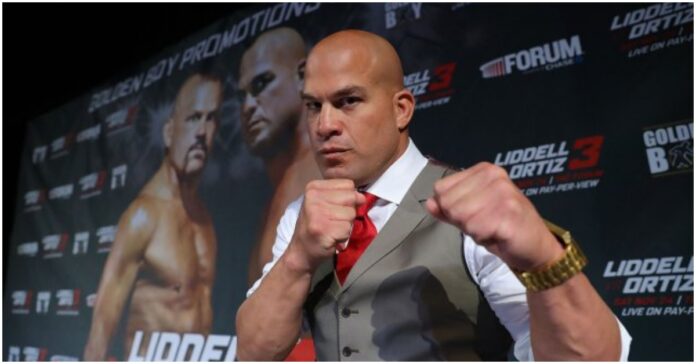 Former UFC light-heavyweight champion, Tito Ortiz says he will fight one more time before the end of the year.

Now 47-years old, and 10 years removed from his last fight in the UFC, Tito Ortiz ‘guarantees’ he will make a return to the cage before the year is done. Talking to ‘The Schmo’, ‘The Huntington Beach Bad Boy’ says his career is not over and revealed he is already in discussions with MMA promotions.

“It’s just preparation, Ortiz began. ‘It’s getting in the gym, continuing in the gym and putting in the work. You can’t have a month camp and try to fight in your 40s, you gotta prepare for the six months, seven months. Its mentality, how young you think you are, myself I’m 47 right now, I won’t be 48 until next year. I feel good, I feel strong.”

“I just started training this week,” Ortiz continued. “I’ll fight one more time this year, before the year is over, I want not to go out the way I did against Anderson [Silva].”

We last saw Ortiz compete in a boxing match against former UFC middleweight champion, Anderson Silva, as part of Triller’s Holyfield Vs. Belfort event. The American would be brutally knocked out by Silva after an unimpressive performance in just the first round.

This time though, Ortiz says he will be returning to his roots and will make his return to the cage for a MMA contest.

“It’ll be an MMA fight, like I say I just started preparing this week, ill be getting ready here for the next four months, we’ll see maybe September, October another Tito Ortiz in the Cage.”

We last saw Ortiz compete in an MMA fight in 2019 against fighter-turned professional wrestler, Alberto Rodriguez, better known as Alberto Del Rio. The UFC pioneer would submit Rodriguez to earn himself a first-round finish.

What do you think about Tito Ortiz making a return?