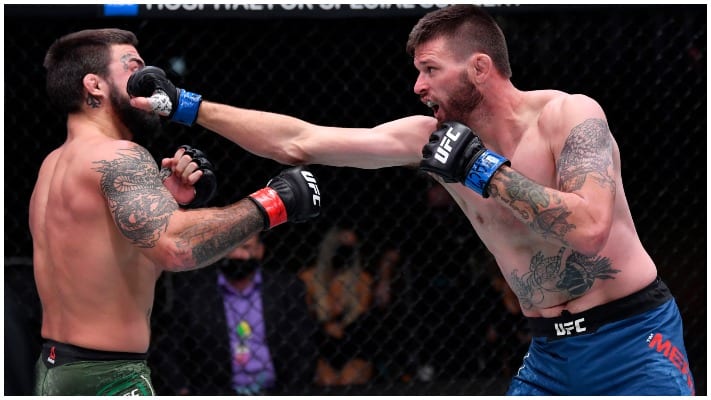 Tim Means was not surprised when his UFC 255 opponent Mike Perry missed weight by 4.5lbs. ‘The Dirty Bird’ claims Perry had been sending him direct messages eating burgers when he was meant to be cutting weight.

Perry forfeited 30 percent of his fight purse to Means who stepped in on short-notice to replace former welterweight champion Robbie Lawler who was originally booked to square off against ‘Platinum’ at the UFC APEX on November 21.

Means says he was not surprised to see Perry spectacularly miss weight after receiving messages from his opponent who was eating junk food in the weeks before their UFC 255 fight.

“He was sending me Instagram messages like, two weeks ago, eating big cheeseburgers with onion rings on them, stuff like that,” Means said. “It looked delicious. He asked me how the weight cut was going. I sent him some pictures of broccoli and avocados or whatever.

“But we knew that with Mike coming into this fight. I know him behind the scenes and stuff, what you get on camera that’s exactly who he is off camera. I have nothing but respect for the guy, I know he’s going through some adversity and stuff and sh*t will just make him stronger.”

On the night Perry was still able to cause Means some trouble and even managed to take the first round. As the fight progressed Means started to dictate the exchanges and ultimately pull off a decision win as planned.

“I thought the fight went as planned,” Means said. “I wasn’t really stressed about him not making weight yesterday, I knew he did just enough energy-wise to get within that five-pound limit to where we could still have a fight. He got up there dancing so I knew he still had plenty of energy. I knew he was gonna be strong, have a lot of heart, be durable, and that all happened the night of the fight.”

Means is not concerned about if Perry did or did not make a genuine attempt at welterweight and is happy enough with the extra $27,000 he picked up for the fight.

Who do you want to see Tim Means fight next?