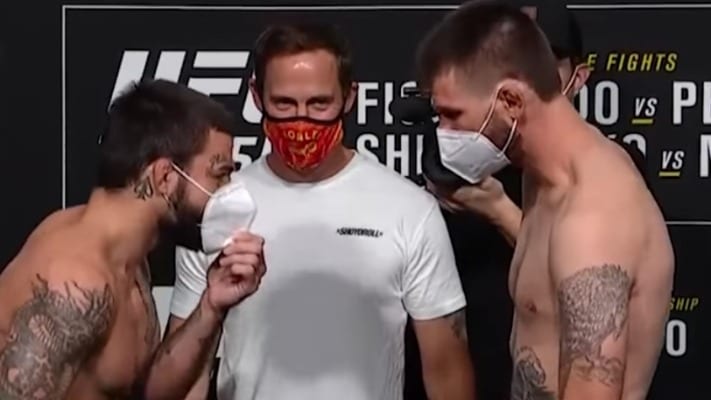 Next up on the UFC 255 main card is a welterweight encounter between Mike Perry and Tim Means.

Round 1: Both fighters are methodical in the early goings of this fight. Means lands a leg kick. Perry misses a left but goes for a takedown attempt. Perry gets the body lock and drags Means to the ground as he’s in full guard. Perry gets his back soon after and has the hooks in as well. Perry looks for the rear naked choke but Means is doing well to defend for now. Perry looks like he’s sunk it in but Means survives and reverses the position. They’re both back to their feet now and Means is the one leading with Perry’s back to the fence. Perry lands a leg kick. Means is effective with some nice stinging jabs. Perry lands a hard body shot. Means returns with a knee as he continues to back Perry up. Perry lands a nice right hook but Means eats it and unloads with strikes as the round ends.

Round 2: Means lands a nice body shot and continues to employ an effective and clean jab. Perry returns with a leg kick but Means continues to accumulate the strikes. Means defends a takedown attempt. Means dodges a head kick and has Perry backed up against the fence again. The fight goes back to the center of the Octagon. Perry misses a wild right hook. Perry has bruises on his face as Means continues to land strikes. However, Perry lands a big right and follows it up with more strikes as he looks for another takedown attempt. Means defends it and they return to striking. Means just partially misses with a lead elbow. Perry blocks a head kick from Means and returns with a right leg kick. Means lands a nice left elbow. This has been a clinic for Means ever since he escaped the submission attempt from Perry in the first round.

Round 3: Perry looks to return to where he had most success as he clinches Means up against the fence and looks to take the action to the ground. However, Means defends and separates with a right hand that connects. Perry is backed up against the fence now but manages to take the action to the center. Perry lands a body shot and follows it with a right hand. The two start to brawl more now as Perry lands a big right. Means lands a left hook before rushing with a takedown attempt. He has Perry clinched up against the fence. Means lands a nice knee. Perry is bleeding and his right eye is swelling up. Perry is getting more aggressive and just misses a knee. Means, however, is still controlling the fight and looks on his way to winning a decision. The round ends with the pair engaged in a slugfest.