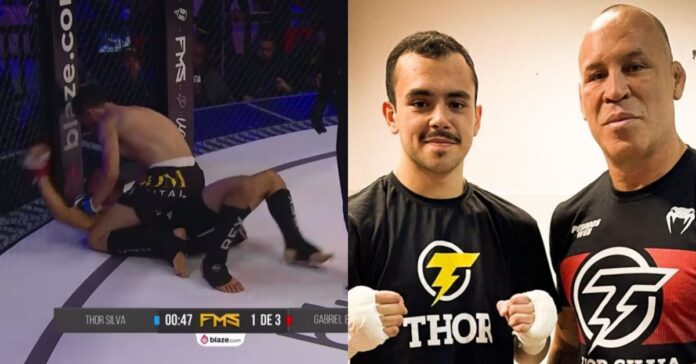 Thor Silva, the son of all-time sport icon, Wanderlei, featured for the first time as an amateur mixed martial artist at on the undercard of Fight Music Show 2 in his native Brazil, defeating Gabriel Bonfim with first round ground strikes.

The event also marked the professional boxing debut of former UFC, Strikeforce, Invicta FC, and current Bellator MMA featherweight champion, Cris Cyborg, who topped the card against Simeone Silva – securing a unanimous decision victory of her own, as she makes her first venture into professional boxing.

Expertly utilizing a single leg takedown to plant Bonfim on the canvas, Thor SIlva then managed to work his way to full mount, before posturing and unloading with a series of ground strikes to Bonfim, securing an opening round TKO victory in his amateur mixed martial arts debut.

As for his father, Wanderlei Silva, the Curitiba veteran, who recently confirmed his retirement from professional mixed martial arts ahead of a planned move to professional boxing, turned in an iconic career inside the cage, landing the Pride FC middleweight title as well as clinching the 2003 Grand Prix before a return to the UFC for the swansong years of his career.

Over the course of his legendary run with the Japan-based, Pride FC, Silva became the first middleweight champion in organizational history, as well as eventually becoming the leader in all-time wins, knockouts, title defenses, and the longest winning streak in the promotion’s antiquity.

Following the recent confirmation of his retirement, Silva confirmed he would be interested in pursuing potential boxing matches in the future, welcoming the possibility of sharing the squared circle with a slew of former world champions.