LowKickMMA.com
Home Combat The Rise Of The Gracie Family And BJJ 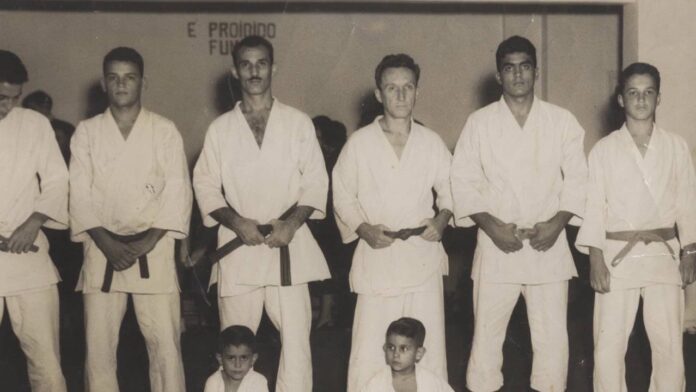 Responsible for founding Brazilian Jiu-Jitsu (BJJ), the Gracie family is widely regarded as one of the most successful family dynasties throughout the history of martial arts. The tremendous influence this clan has had on the world has led to the production of World Champions for many decades. This long-lasting legacy continues to grow and inspire practitioners of all ages to take to the mat.

The Gracie success story stretches back to the early 1900s when the patriarch of the family would plant the seed from which generations of Gracie champions would flourish.

From the tough streets of Rio de Janeiro to the bright lights of Las Vegas, the Gracie family has literally fought their way to the top. Having achieved unsurmountable levels of success in combat sports, the Gracies and their pioneering efforts birthed BJJ, also know as Gracie Jiu-Jitsu.

From Carlos Gracie, the founder of the first Gracie Jiu-Jitsu Academy – to Royce Gracie who brought the eyes of the world to the discipline –  we will look into how the family name became synonymous with dominance in both grappling and mixed martial arts.

Carlos Gracie was just a teenager when he watched his first Jiu-Jitsu display. Not long after, he quickly became intrigued with the martial art and went on to take lessons from the famous practitioner Mitsuyo Maeda. Gracie continued to study the art of Jiu-Jitsu, eventually working his way up the ranking system.

By 1925, Carlos had opened the doors of his first Jiu-Jitsu academy. From here, he went on to promote his style of Jiu-Jitsu and he put forward ”The Gracie challenge” – an open invitation for fighters to come and test their skills against him. The Gracie challenge was a great piece of propaganda and would stand for decades after.

Carlos taught his style of Jiu-Jitsu to his brothers Gastão, Jorge, Oswaldo, and the youngest brother, Helio. The young Helio Gracie initially struggled with some of the Jiu-Jitsu maneuvers – given his small and nimble frame, he was forced to adapt. They say innovation is the key to success, and this couldn’t be truer in Helios case.

Helio Gracie continued experimenting with techniques and leverage took priority over strength in his new fighting system. The changes Helio implemented were so effective that he began teaching the modified style to others – this was essentially the birth of Brazilian Jiu-Jitsu.

Helio Gracie challenged boxers, wrestlers, and other grappling experts throughout the decades, firmly establishing his name amongst the martial arts world. Helio was key in the development of Brazilian Jiu-Jitsu as a result. The brothers bore many children between them most who were trained from a young age. The next generation of Gracie fighters would take Gracie Jiu-Jitsu to a whole new level.

The family continued developing their techniques throughout the generations and by 1978, Rickson Gracie – the third oldest son of Helio – was carving out his reputation as one of the best fighters in Brazil. Rickson, like his uncle Carlos, set down the now famous Gracie challenge – by offering, by open invitation, for any fighter to come and beat him at his gym.

Rickson had been fighting from a young age and received his black belt at just 18 years old. He gained national attention at the age of 20 when he beat the famous Brazilian brawler named Casemiro Martins. The young Rickson continued competing at the top level throughout his career, including fighting in Vale Tudo competitions at home and abroad.

One of the most popular combat sports of the time in Brazil was Luta Livre, and the Gracies developed a rivalry with the Luta Livre crew which spanned decades. Both camps were vying to take top spot in the national martial arts scene, meaning competition was fierce. Challenges arose regularly from both Luta Livre and the Gracies with most fights ending in disputes and controversy.

The ongoing rivalry ended in a riot which led to MMA being banned in Rio de Janeiro for a long period of time. The level of animosity between both camps lasted generations, and although it resulted in controversial outcomes, the competition only proved to motivate the Gracie family towards greatness.

The Gracies were competing at the highest levels and although they had fame in their native Brazil. Rorion Gracie yearned to promote BJJ on a worldwide scale, setting off for the United States with the ambitious aim of bringing BJJ to the world.

Rorion Gracie moved to the USA and left the Luta Livre rivalry to be fought out amongst other members of the family. He taught BJJ in California for years and had grown a large following. Gracie had many students in California and gained some good connections, which eventually led to him co-founding the famous UFC.

The entrepreneur realized that he would need to televise Gracie Jiu-Jitsu if he wanted to achieve worldwide attention. The UFC would host fighters from all over the world and from all fighting styles, there would be few rules and no weight classes. This new event was relatively unique and initially caused a stir in the USA.

Rorion put his brother Royce forward as the family representative, given that Royce was a successful BJJ artist, but he was relatively unknown. Royce became the underdog of the competition due to the pedigree of his opponents and, well, due to his size. Now, Royce wasn’t a small man, but some of his competitors were very large and had formidable records in their respective disciplines.

Gracie took on Art Jimmerson in the first leg of the competition and quickly brought the fight to the ground before pinning the boxer’s arm around his own neck, forcing the boxer to concede defeat. Royce then went on to defeat the legendary pioneer, Ken Shamrock, before finally tackling the Dutch Karate expert and world Savate champion, Gerard Gordeau.

The spectacle of Royce Gracie securing a rear-naked choke on the much larger heavyweight champion Gordeau raised eyebrows around the world. The new Ultimate Fighting Championship had just been dominated by the smallest man in the competition, catapulting the Gracie family to the pinnacle of martial arts.

Royce went on to contend for the UFC title four more times with great success. He also fought in the Pride and Bellator competitions. Royce Gracie was a BJJ master and enjoyed an illustrious career, but he will always be revered for his UFC 1 performance.

BJJ grew like wildfire and fighters who once trained under Luta Livre eventually started to transition over to the now dominant force in mixed martial arts. The huge success of the UFC further propelled the growth of BJJ, which has now become an integral part of mixed martial arts training.

Gracie Brazilian Jiu-Jitsu gyms have cropped up all over the world. Aspiring fighters are drawn to BJJ due to its successful track record and it is now an imperative part of most MMA training.  The fighting style is also one of the most effective forms of self-defense. This is down to the various locks and submissions which allow a person to submit a much stronger attacker.

The Gracie family has revolutionized Jiu-Jitsu and exported their unique style worldwide. It has flourished to become one of the most dominant forces in mixed martial arts and continues to grow exponentially.

The great part is, it has even more growing to do.

If you are interested to learn Gracie Jiu-Jitsu in Singapore, Evolve MMA is the largest BJJ gym in Singapore and is home to the first and only Renzo Gracie Brazilian Jiu-Jitsu gym in Asia. Sign up for a trial class with us today!