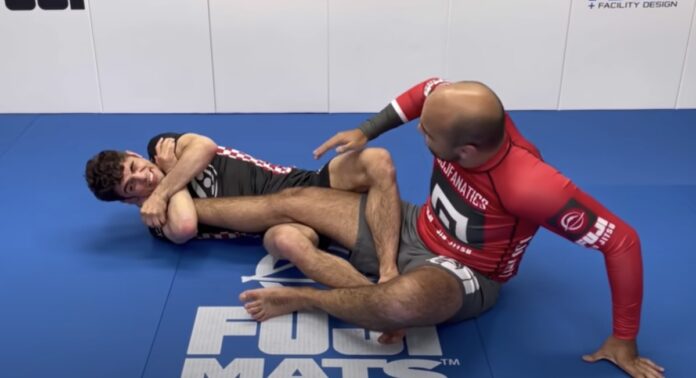 If you’re a fan of multi time BJJ champion, Mikey Musumeci, you’ve been watching his intro into No-Gi competition. He has been impressive since coming onto the No-Gi scene.

You may have noticed that he had developed his own highly effective leg lock. The Mikey lock.

It has been the talk of the BJJ world and many have been wondering how his new leg lock works. Here is our breakdown of the Mikey lock and everything you need to know about Musumeci’s leg lock. Everything from how it works and give you tips for doing the technique.

How was the Musumeci lock developed?

Mike Musumeci is a multi time BJJ champion in the Gi and is well versed in IBJJF legal leg locks. He had actually been developing his Mikey lock months before he made his No-Gi debut.

The reason he came up with this grip was to counter his opponent’s defense of slipping out of heel hooks. They were able to point their toes down and slip out of the traditional heel hook grip.

But the new grip he developed that has been dubbed, the Mikey lock addresses this defense.

His new leg lock grip proved to be quite effective when he debuted it at a WNO event this year. Since proving his move’s effectiveness, Musumeci has released a few videos demonstrating the grip he’s been using to hit his submissions.

How does the Mikey lock work?

How the Musumeci lock works revolves around the grip that Mikey uses to finish his leg locks. The grip is a rather simple cupping of the opponent’s heel.

By cupping his opponent’s heel, Musuemci establishes an incredible amount of control over their foot. This grip can be used for a variety of leg locks from a toe hold to a knee bar.

But the most effective submission by far involving this grip is the heel hook. With the heel hook using the Mikey lock, not only does it attack the opponent heel, but also the achilles.

The submission also comes on incredibly fast and the opponent must submit quickly or risk catastrophic injury.

As we briefly mentioned in the section above, the Mikey lock addresses a common defense for the heel hook. For the heel hook to work, your opponent’s toes need to be pointed up.

When their toes are pointed down, there is no pressure on their knee and they can slip out of your grip.

Then your top hand comes on top of your bottom hand to support your cupping grip. Your grip along with trapping your foot with your head forces your opponent’s foot to stay straight.

A slight turn outward not only puts pressure on your opponent’s knee, but also their achilles. Two submissions for the price of one.

The best leg configuration for the inside heel hook using the Mikey lock is a mix of two leg lock systems. It’s something Musumeci calls X flex.

His X flex position has your inside foot onto your opponent’s inner thigh like in 50/50. Then your outside leg comes over and hooks  under the opponent’s far leg like in the inside sengaku or honeyhole position.

The only defense your opponent has to defend against this position is to kick your elbow to break the grip.

Let’s say your opponent tries to kick your elbow to break your grip. When they try, grab your opponent’s leg, lift it up, and hook your leg behind their far leg.

As you hook behind their far leg, you’re going to turn to your stomach, and place your forehead on the mat. Musumeci refers to this position as inverted backside, which is an incredibly strong position.

From this position, you have 150% range of motion. If you lift up, the move turns into a kneebar and achilles lock. But if you keep turning out, you go right back into the first heel hook position with your Mikey lock grip.

When you rotate your body and go for a heel hook, there are a few seconds for your opponent to defend. In a normal heel hook, where you place their heel under your armpit, they can start rolling to defend the submission.

With the Mikey Lock, your opponent doesn’t have that moment to defend like a normal heel hook grip. Instead, you move your opponent’s heel a shorter distance and between your shoulder and head and lock in the Mikey lock.

Using the Mikey lock grip will give your opponent less time to defend by rolling out.

The Mikey lock in many aspects is easier and more powerful than a normal heel hook grip. You just have to remember these important tips below.