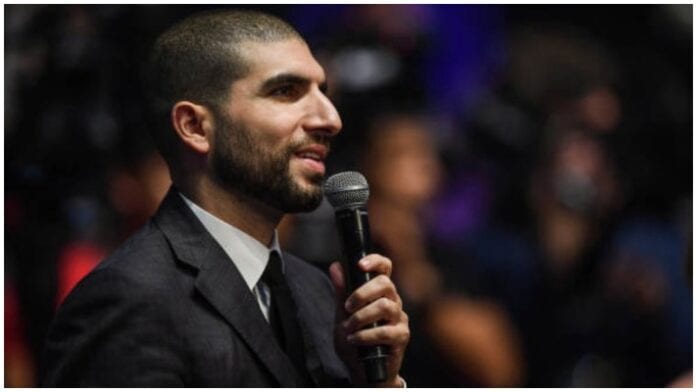 While the likes of Israel Adesanya, Francis Ngannou, and Colby Covington dominate things inside of the Octagon, one of the most well-known faces outside the octagon is Ariel Helwani. From his Twitter spat with Dillion Danis to his ban from the UFC, Ariel Helwani is certainly used to being in the MMA spotlight.

Arguably few would have expected he would become so prominent, especially as he lost his first opportunity in sports journalism after dropping out of a summer internship with NBC. It was a decision that cost him a trip to the 2004 Summer Olympics in Athens, although it was through an injured ankle. However, he didn’t let that disappointment hold him back as he soon joined HBO as a sports production assistant before going solo, reporting on MMA when he started with MMAFighting.com.

While others may have seen it as a backward step, it proved to be a masterstroke. The Canadian reporter and journalist has gone on to be a regular at MMA events across the world since 2006 and has grown to become one of the most respected media members. After spells with Fox and HBO, Helwani stepped away from his most recent post with ESPN last year to return to host the MMA Hour, the popular broadcast from the website MMAFighting.

However, away from his work with the media, Helwani is just as outspoken regarding his other passions in life, sneakers, and American sports. In one of SoleSavy’s podcasts, Helwani spoke about his love of sneakers; however, although his collection includes a pair of glow in the dark Yeezy’s and Air Max London’s, his stockpile of footwear developed as a by-product of his love for basketball. He grew up in Canada, and Helwani was a big fan of American sports rather than ones traditionally better supported in his home country. However, with the NBA hardly being covered in the media, he had to work hard to seek out everything he could. Helwani would grab paper clippings and watch the shortest news reports before picking up his first pair of sneakers, replicas of the ones that legendary basketball player Patrick Ewing wore.

Ewing is an icon of the NBA and the New York Knicks, and Helwani’s not afraid to speak about how much they mean to him to this very day. He even admitted he was so invested in supporting them in the 90s that he would cry when they lost games. However, in current times he’s an admirer of the Utah Jazz in the Western Conference too, as he told the Roundball Roundup podcast, they’re his pick to get into the postseason in 2022. Helwani’s love of the Jazz comes from his friendship with the likes of Deron Williams, who love his reporting style and MMA, and that was what naturally brought them together.

In other sports, Ariel Helwani loves the Toronto Blue Jays in the MLB and is a fan of the Buffalo Bills in the NFL, so his passion and commitment to sports spreads far and wide. His other passion is writing, and his blog, which is entitled Helwani Nose, mainly focuses on MMA and he loves to interact with his subscribers once a week. That ongoing interaction shows Helwani is a man of the people and what’s interesting he’s not afraid to speak his mind no matter who he upsets.

However, no matter if he’s causing fans to question him or the organizers of the UFC with his forthright views, which have resulted in him in being temporarily banned from events in the past, what is clear is that his passion for MMA and reporting shines through. And that is why, there’s no doubt that he’s one of the best reporters there’s is in the sport, and why Ariel Helwani is one of the most significant people in sports media today.