LowKickMMA.com
Home Other The Importance Of OSU Wrestling To Primitive & Modern MMA 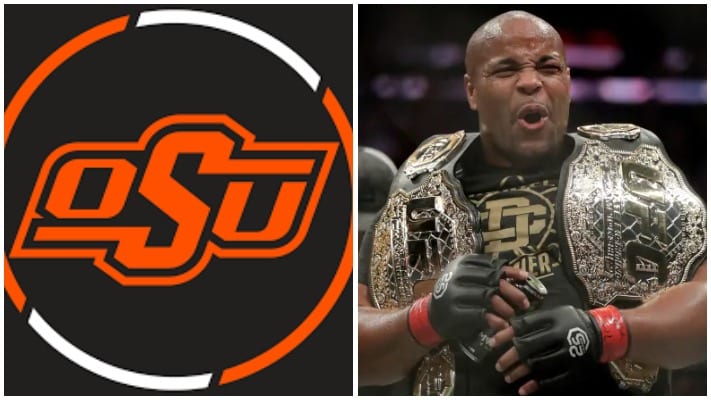 Oklahoma State University has a rich history of producing elite-level mixed martial arts fighters and has been doing for several decades. The school’s wrestling team has long been one of the best in the country and for some reason, its athletes always seem to bet on MMA as their follow-on career.

In the late 1980s before MMA or the UFC was even a thing Don Frye and Randy Couture were teammates on the OSU wrestling team. The pair would go on to become pioneers in the sport of MMA and legends of the game.

Frye entered the UFC in its very early days when the sport lacked many of the rules we see in place today – one such rule was no weight classes. Frye won the UFC 8 tournament and the UFC 1996 tournament too. Although in those days they didn’t have a belt system he was for all intents and purposes a UFC champion and remains a fight legend.

Couture left OSU with his place in the Hall of Fame secure and went to work on achieving the same feat inside the UFC. His list of accomplishments is staggering, to say the least. ‘The Natural’ held UFC titles on six occasions. He was the first fighter to become a champion in two different weight classes and he was also the oldest ever champion when winning the heavyweight strap at 45 years old – he was inducted into the UFC Hall of Fame in 2006.

In more recent times you have had guys like Johny Hendricks emerge from OSU to become UFC champions. ‘Big Rig’ won two NCAA Division I championships during his years at college where he finished with an overall wrestling record of 159 – 13. The now retired MMA fighter took to the sport like many from OSU – naturally. He had the elite level grappling base and ungodly power in his hands that made him the UFC welterweight champion.

Currently Daniel Cormier is the man flying the flag for OSU in the UFC. The 41-year-old was a standout wrestler at OSU and went on to represent the USA at the 2004 Olympics coming fourth. He was named captain for the 2008 games but was forced out due to kidney failure brought on by excessive weight cutting. Since transitioning to MMA in 2009 he has enjoyed great success and is arguably one of the greatest fighters ever. ‘DC’ won the Strikeforce heavyweight grand prix just 10 fights into his professional career. He went on to join the UFC an become a dual weight champion at light-heavyweight and heavyweight, he was just the second fighter to do so.

While the OSU wrestling team has produced three UFC champions and a tournament winner it has also produced a lot of other high calibre fighters who still made a massive impact despite not reaching the lofty heights of UFC gold. Shane Roller, Jared Rosholt, Jake Rosholt Mark Munoz, Muhammed Lawal were all part of the OSU wrestling team and all went on to become world-class MMA fighters.