LowKickMMA.com
Home UFC News The 4 Most Famous Couples in MMA 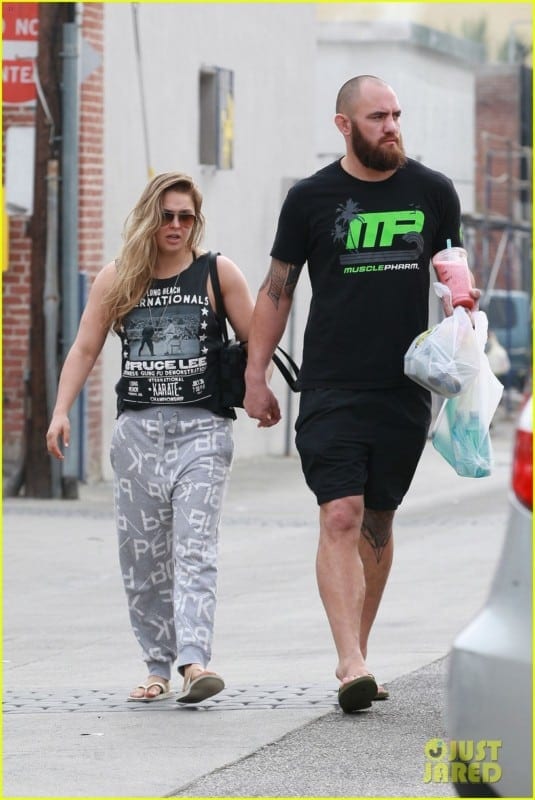 The phrase “Love with fists” has a completely different meaning when talking about MMA fighters.

It may be hard to imagine, but strong and dangerous guys and girls can also have feelings.

As practice shows, most often, athletes are drawn to each other.

That is certainly understandable as common interests help relationships rather than hinder them.

Is there a place for romance in a world where everyone is hitting each other in the face?

It turns out that there is, and moreover, it is found there more often even than Russian brides online.

We will try to figure out how relationships develop in the most famous MMA couples.

Former UFC bantamweight champion Miesha Tate dated Bryan Caraway. The pair met at Central Washington University and stayed together as they rose to the top of MMA. Tate coached on The Ultimate Fighter alongside her longtime rival Ronda Rousey. Caraway infamously threatened Rousey over social media and was in the firing line of ‘Rowdy’ and her coach throughout filming. Tate and Caraway’s relationship eventually came to an end. The WMMA legend has been dating Johnny Nunez since 2018, the couple has two daughters together.

Ronda Rousey and Travis Browne linked up back in 2015 and have been inseparable ever since.. ‘Rowdy’ is the former Strikeforce and UFC bantamweight champion who forced Dana White to change his stance on female MMA. Rousey became a global superstar during her UFC run and has even featured in several movies. Browne was once a heavyweight contender. He has several high-profile wins over the likes of Josh Barnett, Alistair Overeem, and Stefan Struve. Since leaving MMA behind the couple have enjoyed successful stints in the WWE.

Amanda Nunes is perhaps the greatest female fighter in history. The Brazilian currently holds two UFC title and was the first gay fighter to claim a major title in MMA. ‘The Lioness’ credit her success to the relationship she shares with her wife and fellow UFC fighter Nina Ansaroff. ‘The Strina’ is one of the best flyweight fighters in MMA, she currently sits at #5 in the division despite taking time off to give birth to the couples first child.

Popular BKFC fighter Paige VanZant dated the former UFC bantamweight champion, Cody Garbrandt in her early 20’s. VanZant had a long and fairly succesful career with the UFC before branching out in search of bigger paydays. The 26-year-old has catapulted herself into the mainstream by featuring on shows such as Dancing with the Stars. Garbrandt has stook to his MMA roots, despite suffering several tough losses lately. ‘No Love’ is now back in the win column and can look forward to a main event fight against Rob Font in May.

The relationship between VanZant and Garbrandt quickly fizzled out. ‘PVZ’ has gone on to marry Bellator fighter Austin Vanderford is also a mixed martial artist. Garbrandt is also married. He met Danny Pimsanguan during his run with the MMA promotion Pinnacle FC. The pair married in 2017 and Pimsanguan gave birth to their first child one year later.