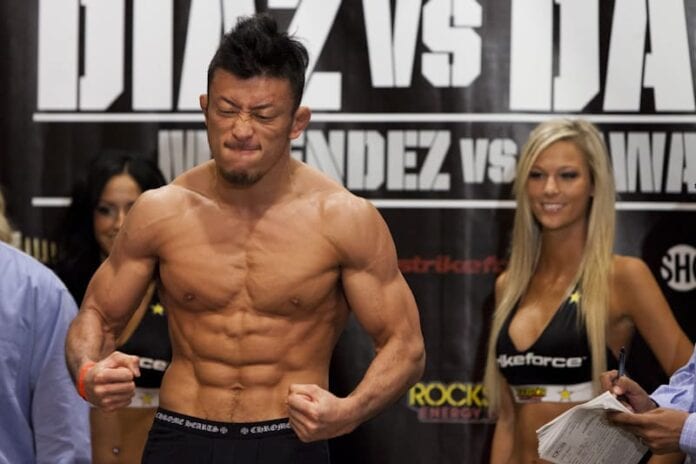 Featherweight veterans Dennis Siver and Tatsuya Kawajiri looked to rebound with a big win in the co-main event of today’s (Sat., June 20, 2015) UFC Fight Night 69 from the O2 World in Berlin, Germany.

Kawajiri came out with two wild kicks that missed, throwing an uppercut that didn’t find its mark as well. Finally a body kick landed, but a spinning back fist attempt did not. Siver kept his punches straight and contained, landing a few before Kawajiri attempted a single leg. Siver defended it well, breaking loose to throw a looping hook and low kick. Siver stalked Kawajiri with kicks and hooks, landing a hard shot. Kawajiri’s takedown was stuffed once again and Siver threw his trademark spinning back kick to the body. It landed, but Kawajiri shot for another takedown on the cage. Again the German kickboxer stuffed it, but the Japanese star threw him to the mat right before the bell sounded on the exciting first round.

The crowd chanted Siver’s name when the second began, and Kawajiri pressed forward with two shots. He lunged for an uppercut and Siver threw a back kick that barely missed. Kawajiri went for a spinning back elbow and Siver worked his low kicks, with the German dumping him briefly when he went for another spinning attack. Kawajiri went back to his wrestling, eventually grinding Siver to the mat and controlling him with some light ground and pound. He looked to pass and improve position, smothering Siver to the point of sheer nullification when he achieved the mount. Siver got away briefly but Kawajiri ended the second on top.

In the third, Kawajiri went for another spinning backfist and Siver fended off a takedown. But Kawajiri persevered to secure his next attempt, and Siver went for a guillotine from the bottom. His opponent got out and the fight returned to the feet, with both fighters winging and missing spinning kicks. Siver scrambled to go for Kawajiri’s back, but he spun out to look for another takedown. He went deep for it as Siver sought another guillotine, dumping him to the mat. Kawajiri got out of the hold once again, landing short elbows and ending the close fight on top.