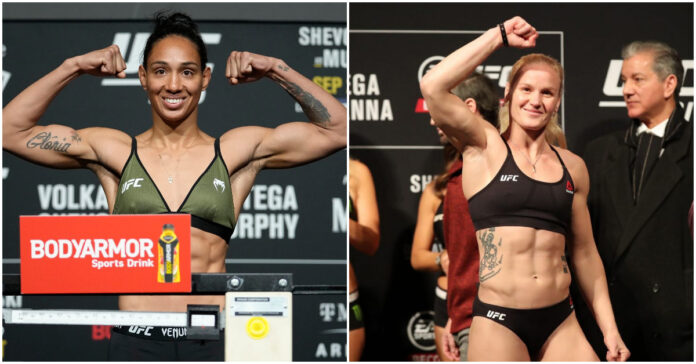 Taila Santos had no problem revealing her game plan for her upcoming title fight against Valentina Shevchenko at UFC 275.

Current UFC women’s flyweight champion Valentina Shevchenko is on an eight-fight win streak that saw her dominate the division. ‘Bullet’ will be going into her next title defense against Santos after defeating both Lauren Murphy and Jessica Andrade by TKO in her last two outings.

In a recent appearance on the Combate podcast, Taila Santos shared her strategy for achieving a stunning upset over Shevchenko. Taila is respectful of her adversary’s grappling but believes there’s one weakness in Valentina’s game that she could exploit.

“I believe I’m taking this fight to the ground.” Santos said. “Valentina is a very tough fighter. Her strong suit is in the striking game, but I believe I can be successful on the ground.”

“She’s very tough on the feet.” Taila continued, “She has defeated some really tough fighters. She’s also really smart, but I believe I’ll find success on the ground. That’s where I feel super comfortable. I come from a muay thai school, so I also feel great on the feet. However, I see her weaknesses on the ground, so I believe that’s the area where I’ll find success in the fight.” (h/t Bloody Elbow)

Santos goes into the bout on a four-fight winning streak, having dispatched Molly McCann, Gillian Robertson, Roxanne Modafferi, and Joane Wood in her latest outings. With 19 wins in 20 matches, the only blemish on the 28-year-old’s record is her contest against Mara Romero Borella which she lost by split decision in February 2019.

Valentina Shevchenko will defend her title against Taila Santos in the co-main event of UFC 275 on June 11 in Singapore. The women’s flyweight bout will be followed by the headlining light heavyweight title fight between reigning champ Glover Teixeira and challenger Jiri Prochazka.