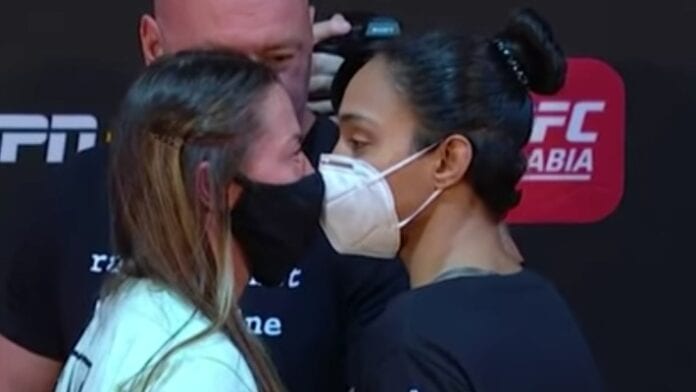 Next up on the UFC Fight Island 1 main card is a women’s flyweight contest between Molly McCann and Taila Santos.

Round 1: McCann starts with a leg kick but is countered by a one two from Santos. Santos misses a head kick. Santos lands two knees to the stomach but allegedly held McCann’s hair and is given a warning from the referee. McCann lands a nice right hand. Santos responds with a stinging body kick that partially lands and follows with a leg kick. Santos lands a knee as McCann ducks for a body punch. McCann looks for the takedown but Santos defends and lands knees in a Thai clinch. McCann is now against the fence and gets taken down emphatically. McCann gets up but is being controlled by Santos who has the body lock. Santos takes her down to end the round strong.

Round 2: Santos continues her kicking game. McCann is still in this one, though. McCann catches a leg from Santos and looks for the takedown. However, Santos continues to defend well. McCann lands a nice knee but Santos replies with some of her own which seem to be more effective. Santos slips as she lands a body kick but is able to defend a takedown attempt before taking McCann down. She quickly transitions to full mount. She then transitions to a D’arce choke attempt. However, she lets go after some time but still has the body lock and lands a knee. Santos lands another takedown and goes to mount again. McCann survives.

Round 3: Santos lands a number of kicks and continues to evade big strikes from McCann. McCann is showing plenty of urgency as she knows she is losing the fight. However, she is unable to deal with the versatile kicks of Santos. Santos pressures her against the fence and looks for another takedown and lands it. Santos looks to land ground and pound but eventually stands up before going back down. She looks for another D’arce attempt but McCann seems to have defended it. Santos circles to McCann’s back. She then transitions to full amount and looks to land ground and pound. McCann survives but will likely lose the decision.