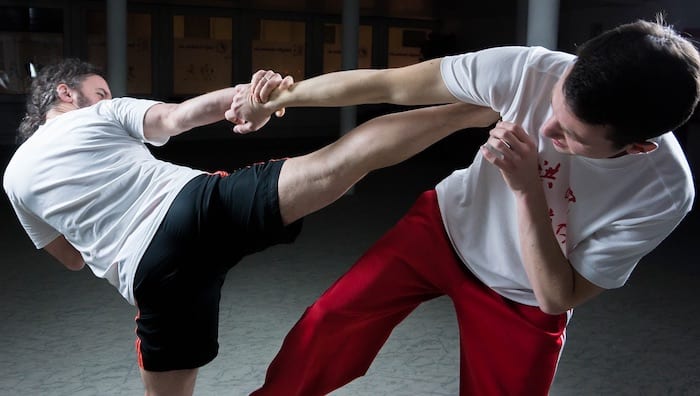 At one time Taekwondo was probably the most practiced martial art in the world. Today it isn’t as popular as it was being overshadowed by BJJ and MMA, but still has a large following.

It’s still amazing that a martial art like Taekwondo that’s less than 100 years old is practiced worldwide. Not only that, but became a recognized Olympic sport.

Although, there is one thing that can be a bit confusing about Taekwondo and that is the Taekwondo belt levels. Since we broke down BJJ’s ranking system, we should also break down other ranking systems including the one in Taekwondo.

If you ever wanted to know about the Taekwondo belt levels, then this is an article you need to read. We’ll break down each belt level along, with how long it takes to progress to each belt.

What are the Taekwondo belt levels?

This question is a little harder to answer than with the jiu jitsu belt system. With the BJJ everyone uses the same belt system just with different requirements depending on the affiliation.

It’s a little bit trickier in Taekwondo, because the belt rank depends on which affiliation the Taekwondo school is in. There’s numerous Taekwondo organizations in the world, but there are three that are the biggest.  World Taekwondo and the International Taekwondo Federation and ATA Martial Arts.

As you can see Taekwondo’s belt levels is quite a bit more complicated than Jiu Jitsu’s 5 ranks. Since World Taekwondo is the biggest out of these organizations, we’ll go over their belt system.

How do you get promoted in Taekwondo?

Another way Taekwondo belt levels is vastly different from Jiu Jitsu’s is how you get promoted to each rank. In Jiu Jitsu, you rank up by developing your technique and frequently attending class.

Within Taekwondo, you go through an exam for each belt that involves 6 different tests to be promoted.

This is another gray area as no one school promotes their students the same as another. Some Taekwondo schools will hold belt tests every four months, while traditional schools wait even longer. At six months or more.

Also as you go up to the higher ranks, the period between each promotion gets longer. Especially with you reaching the rank of black belt and have to wait years and years between promotions.

Below is a list of requirements within World Taekwondo’s belt exams. Each school has their own requirements, but it is based on the basic guidelines of WT.

How long does it take to get a Taekwondo black belt?

From the World Taekwondo website, they say that the average time it takes to reach black is at least 3 years. That is only if you are doing the maximum hours of training sessions each month.

The average time of training to get your black belt in this time frame is 40 hours of training per month. Meaning you do not miss a single class and are in the school everytime there is class.

To speed up this process, you could either compete frequently or just have the natural talent to earn a blackbelt.

The stigma of the Taekwondo belt levels

Taekwondo is a great martial art, but like with Karate it has had a bad stigma attached to it. The martial art became widely popular in the 1980s and 90s becoming one of the most practiced systems in the world.

Unfortunately the popularity came with con artists that tried to take advantage of Taekwondo’s popularity. They would open schools that the martial arts community would refer to as “mcdojos.”

Within these mcdojos, they would promise students a blackbelt within a year or two whether it was deserved or not. This practice tarnished the legitimacy of the martial art and they’ve been fighting for respect ever since.

Thankfully, there have been high-level Taekwondo fighters that translated to MMA and kickboxing and have had great success. Fighters like former UFC champ Anthony Pettis, Sergio Pettis, Raymond Daniels, and Michael “venum” Page.

They have helped bring legitimacy back to Taekwondo and show that it is an effective fighting art. Everytime they fight, they leave fight fans on the edge of their seats waiting for a highlight reel finish.