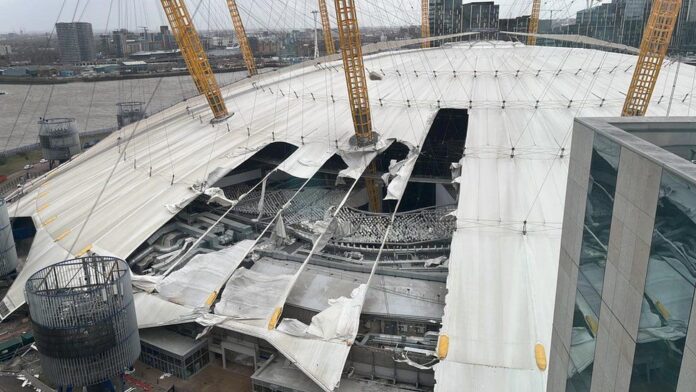 Storm Eunice swiped through the London area on Friday morning/afternoon and did some notable damage to the famous O2 Arena in London. The roof of the dome has been largely shredded apart and has put into question the massive UFC London event taking place at the arena on March 19th.

The venue released the following statement following the incident.

“There has been some damage caused to the tent fabric in our roof at The O2,” a statement read on The O2 website. “The safety of our visitors remains of paramount importance, and we will continue to assess the ongoing situation and act accordingly.”

There are some notable combat sports events that were expected to be held at the arena in the near future other than the UFC London event.

Lawrence Okolie is set to defend his WBO cruiserweight world championship against Michael Cieslak at the venue next Saturday, February 26 while Cage Warriors are also due to return to London on Friday, March 18 for the featherweight title unification rematch between Jordan Vucenic and Paul Hughes.

The following night will see the massive UFC London event take place where the likes of Tom Aspinall, Paddy Pimblett and more will be on hand for the UFC’s first event in London since March 2019. Hopefully, the damage will be repaired in time for the UFC’s long-awaited return to England.

Do you think the damage will be enough to move the UFC London event?