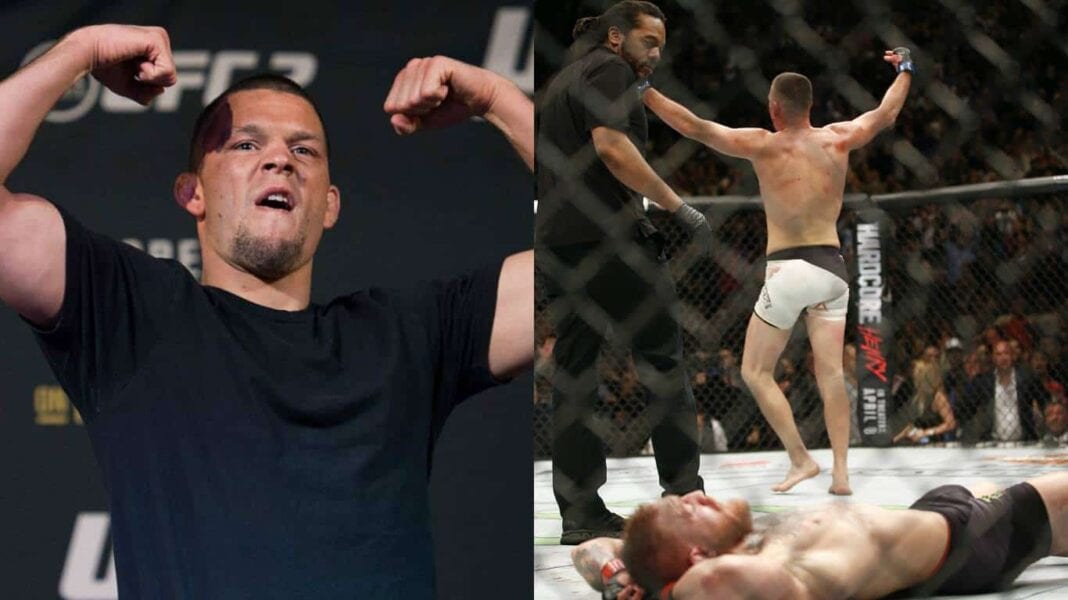 After a long career full of triumph, defeat, and wrestling with his employers, Nate Diaz has finally become a somewhat unexpected breakout star in the UFC.

When it comes to achieving notoriety in the UFC, Ronda Rousey and Conor McGregor seem to have figured out the formula to being the most popular stars, and much of it involves a heavy dose of trash talk and/or self-promotion.

While that’s proven to work, Diaz is a different character and has paved a different path than the rest despite certainly talking a big game. Read on for our list of how he’s managed to become a one of the most admirable stars in the UFC.

He Backs Up His Words:

Diaz shocked the world when he submitted Conor McGregor at UFC 196 via rear-naked choke. McGregor had maintained an undefeated record under the UFC and had made himself the antagonist through his repeated trash talking tactics.

The UFC lightweight championship bout was originally booked to be Rafael Dos Anjos vs. McGregor. However, after Dos Anjos would later suffer a severe injury, having broken his foot right before the fight.

On a 10-day day notice, Diaz stepped up to the challenge and would go on to end McGregor’s undefeated run. The amazing and surprising victory would marked the beginning of Diaz’ rise from a favorite among hardcore fans to a true household name in terms of MMA.

He Doesn’t Accept Just Any Offer:

After his victory over McGregor, lots of rumors where going around of Diaz headlining UFC 200 along with McGregor for a rematch.

Shocked and upset over his first loss, McGregor refused to show up to a press conference shortly before the PPV in order to focus on training, so Dana White decided to pull him from the massive card. According to White, media obligations are a non-negotiable requirement for all fighters no matter what, and McGregor refusing to do so meant he would not participate at UFC’s largest PPV to date.

On such short notice, the opponent seat for Diaz was empty at UFC 200’s press conference, and a glaring question was being asked: who would fight Diaz now? While White seemed sure that Diaz “wanted to fight,” Diaz responded quite differently, answering the question with, “I ain’t doing sh*t.”

Diaz was not interested in being forced to fight anyone else other than McGregor and would not be pressured into doing so, not even by Dana.

While people may not have expected Nate Diaz to be the go-to promotional person for the UFC, he has become just that.

With the upcoming McGregor vs. Diaz 2 rematch at August 20’s UFC 202 approaching fast, media promotion has taken over by covering the event.

Diaz was recently invited as a guest on Conan to promote the anticipated PPV card. Watch above as Diaz responds to McGregor’s comments.

He’s A Role Model For Other UFC Fighters

Following many years of low pay and tough losses, Diaz has quickly risen to the top by beating McGregor.

Diaz did the unexpected and beat the unbeatable to appear as a trending topic on social media for his blunt comments and attitude. Truth is, every UFC fighter could benefit from following in Diaz’s footsteps.

He’s proven to stay true to himself by only taking the fights that he finds are up to his standards and seeking proper pay; an unfortunate problem many fighters deal with in the UFC.

Diaz has now been fighting for 10 years in the UFC and his hard work has finally begun to pay of with a growing fanbase and increasingly popular fights. With more years left in him, he’ll surely leave a legacy behind all his own, never having conformed to anyone else other than himself.

Fighters of today should take note of this, even if it causes some initial resistance in their careers, because without some backlash to the UFC, fighter pay and treatment will never improve.